When learning English idiomatic expressions with me, you should bear in mind that I’m mixing them all together – idioms, phrases, collocations and also phrasal verbs.

Today’s idiomatic expression happens to be a phrasal verb – ‘to come up with’ – and it’s a very popular one and it’s being used by both native and foreign English speakers worldwide.

You can use it whenever you’re having a conversation about the current developments in politics and you want to blame some politician for proposing radical measures in order to deal with rampant crime levels in the capital of your country (It’s hard to imagine that a state politician would come up with such a crazy, unrealistic idea of dealing with crime!)

You can use it in hundreds of different situations – whenever you want to say that you just had an idea, that something occurred to you.

Unlike the expression ‘to cross one’s mind’, however, ‘to come up with’ always implies a deliberate thinking process.

Basically when an idea simply occurs to you without you even trying to think of something specific, you should use the expression ‘to cross one’s mind’.

When you’ve been doing some planning, some thinking, on the other hand, you should use this new expression – ‘to come up with’.

But you can always watch the video above to get a better understanding of how to use this phrasal verb; I have plenty of sample sentences and fictional situations in store for you guys!

By the way, just after I uploaded this video on my YouTube channel, I noticed that the ad being displayed on the video looks a bit weird in combination with my face.

And then I came up with this funny idea of taking a screenshot of it so that you can check it out for yourselves. 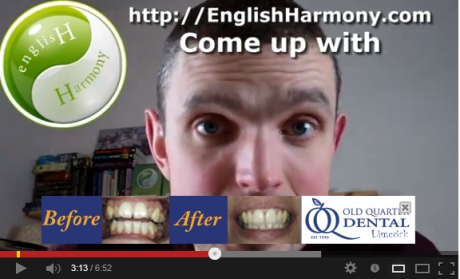 Makes me want to think of Texas Chainsaw Massacre or something similar! 😀