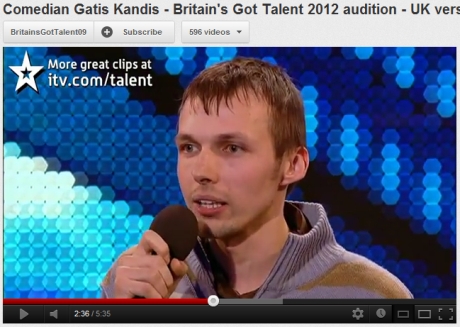 I want you to meet Gatis Kandis – he’s my fellow countryman and recently he was taking part in Britain’s Got Talent where he was doing stand-up comedy.

He got through to semi-finals and while he got the first YES from the judges for the wrong reasons (he was branded by Simon Cowell as the funniest unfunniest comedian which I don’t think was true), there’s a great deal we can learn from him, and that’s why I decided to dedicate a whole article on my blog to him!

First of all, he’s pursuing his dream of becoming a stand-up comedian while being a foreigner living in an English speaking country. It definitely took some courage and dedication to get onto the stage for the first time without knowing what the public reaction is going to be, but obviously it didn’t deter him from doing it.

Secondly, there are always those who’ll point out a foreigner’s accent and mistake it for lack of English skills or whatever. I’m still getting the same treatment on certain occasions because of my own accent, and I’ve learnt a long time ago that ignorance is the only way to deal with it – obviously Gatis has adopted the same approach and it’s paying off big time!

Never Judge a Foreigner by the First Impression!


If you watch Gatis’s first performance on Britain’s Got Talent in this video, you’ll notice a few things.

First, the audience and the judges don’t know him yet so they don’t know how to react to his jokes and his demeanor.

Secondly, his Latvian accent might have created an impression that his English isn’t good enough so people might have been predisposed not to perceive his jokes like those of any other native English speaking comedian.

Thirdly, being on the stage must have been quite a stressful experience for Gatis so it’s hardly surprising that some might have misinterpreted his quirky behavior for lack of professionalism. At first they probably thought he’s one of those chancers getting on the stage despite not having any talent to speak of.

Now I want you to watch a video of Gatis doing stand-up comedy at an open-mike night and you’ll immediate notice a big difference between this show and the video above:


People are laughing about his jokes right from the start and he’s very confident and easy-going on the stage suggesting of only one thing – stand-up comedy is what he’s been doing for quite some time, and people love his jokes!

You see, this is what we foreigners just have to accept.

People will judge us by our accent, by the odd mistake  we make when speaking and by just about anything else they may see as odd and out of ordinary – and it all might be instantly attributed to our foreign origin.

The only way to deal with this is by letting it go and ignoring it, or so I’ve found, and so has Gatis judging by his nonchalant acceptance of David’s comment of his performance being so bad that it was brilliant.

Gatis says – “Works for me!” – and you can listen to his interview on a radio show where he says it and I was literally blown away by his positivism and confidence that radiated from the interview. By the way – you should definitely listen to it because Gatis is asked to make a guy laugh during the interview and he does his job brilliantly!

When I was checking out videos on YouTube featuring Gatis’s stand-up comedy performance, I came across this one which was uploaded 3 years ago. Watch it and you’ll immediately notice that he speaks faster than he does now:
https://www.youtube.com/watch?v=-DnL18XBdYc


He’s also using the word ‘like’ a lot in between words and while there’s absolutely nothing wrong with that – it’s somewhat a staple in plenty of native English speakers’ vocabulary – it probably makes his performance a tiny bit less difficult to enjoy.

Now he speaks slowly and pronounces words clearly and it obviously makes it easier for him to speak.

I’ve often mentioned the importance of slowing your speech down if you feel you’re getting too carried away with it, and it really is a very simple yet very powerful technique of giving your English fluency an instant boost.

Gatis has apparently realized that it’s best to speak a bit slower than the average native English speaker living in Britain than trying to catch up with the natives and risking to ruin his fluency.

It’s something I personally have to pay a lot of attention to because on certain occasions I still keep falling for the false appeal of sounding like a native English speaker in terms of how fast I speak. Luckily for me now the reality check kicks in before I start getting stuck in the middle of a conversation and I resort to one of my English fluency management techniques:

Judging by Gatis’s performance on Britain’s Got Talent, the radio interview and some other videos I found on YouTube featuring him, he’s found his ideal way of delivering English speech because he’s not stuttering or hesitating.

He just says whatever needs to be said, and that’s real English fluency for me – to be able to say whatever you want to say, and to be able to answer any question you’re asked.

On the finishing note, I’d like you to watch the second Gatis’s performance on Britain’s Got Talent:
https://www.youtube.com/watch?v=UbeIh854u0Q

The audience obviously likes him.

And all of a sudden it doesn’t matter if he’s a foreigner or not, because people start seeing the real person that Gatis is – a funny, honest and down-to-earth guy who’s following his dream, that’s all!

There’s a big lesson to be learnt from it, my fellow foreign English speakers.

Everything is possible, remember that! 😉

Chat to you soon,