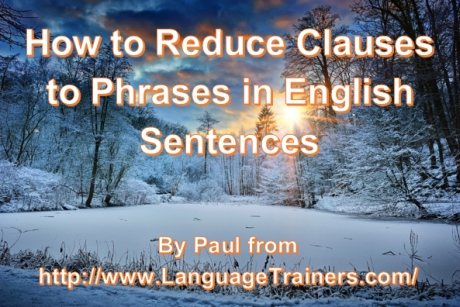 My last article for English Harmony was about when you can and can’t omit relative pronouns such as “who” and “that” from sentences. What we concluded is that you can omit the pronoun when it acts as an object, as in the sentence below:

The dog (that) Mary is petting has brown fur. (The relative pronoun “that” is optional here.)

But you cannot omit the pronoun when it acts as a subject, as in this sentence:

The dog that is eating a biscuit has brown fur.

However, astute reader Juhapekka pointed out that in examples like the above sentence, you can’t omit only the pronoun, but you can omit the pronoun plus the form of “to be” (in this case, “is”):

The dog eating a biscuit has brown fur. (This is a well-formed sentence!)

What is the difference between a clause and a phrase?

Before we get into reducing clauses into phrases, it’s a good idea to be clear about what we mean when we say clause and phrase.

The grammar points that are presented in the article are complicated.

The woman who was riding the subway is late for work.

Clauses are different from phrases, which also modify nouns but do not contain a subject-verb relationship. Below, I’ll rewrite the above sentences, using phrases instead of clauses:

The grammar points presented in the article are complicated.

The woman riding the subway is late for work.

Now, you might be asking — hey, can you really do that? Can you really just omit words from clauses, turn them into phrases, and end up with real sentences? The answer is a resounding yes: but only in special circumstances. Let’s see what exactly those circumstances are.

At the beginning of this post, I mentioned the difference between subject and object relative clauses. If that last sentence isn’t crystal-clear to you, I recommend that you take a look at this article, because it’s important to understand that concept before we continue.

As stated in the introduction to this article, we’ve previously concluded that you cannot omit relative pronouns when those pronouns are subjects; pronouns can be omitted only when they are objects.

However, there is equilibrium everywhere: in sentences that have subject relative clauses, you can’t omit the relative pronoun, but you can reduce clauses to phrases. We can do this by omitting the subject pronoun and the form of “to be” that follows it. Here’s an example:

The person who is driving the car in Germany is a safe driver.

The person driving the car in Germany is a safe driver.

It’s that simple – you just take away the relative pronoun and the conjugated form of “to be”, and you’ve got a new, clause-to-phrase-reduced sentence!

Now, you might be asking: What do I do if the relative clause doesn’t contain the verb “to be”? Great question! Let’s take a look at one of these sentences:

Clause-to-phrase reduction is a process that consists of several steps.

To reduce the underlined clause to a phrase, we do two things: first, we omit the relative pronoun “that”; second, we change the verb “consist” to its -ing form. You must do both of these steps in order to end up with a well-conceived sentence, as the one below:

Clause-to-phrase reduction is a process consisting of several steps.

Note, however, that you can only do this when the relative pronoun acts as a subject. When the pronoun is an object, you cannot reduce clauses to phrases:

The dog that Mary is petting has brown fur. (This makes sense.)

The dog Mary petting has brown fur. (This does not make sense.)

New York is a city that contains many skyscrapers.

The cat that is drinking water must be very thirsty.