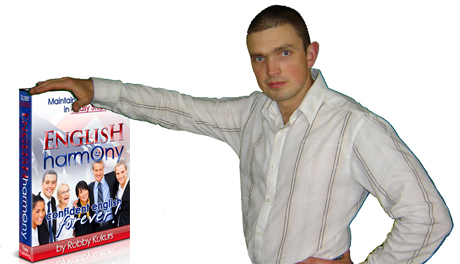 When I started EnglishHarmony.com back in 2007, the English Harmony System wasn’t there yet. Instead I was offering an eBook to my website visitors explaining the English fluency issue and how to deal with it.

Among such methods as elimination of translation and slowing down the speech, I was focusing on something more radical in the eBook. Namely, speaking with your native accent. I know it sounds really strange, and I can understand if you’re somewhat reserved when hearing that in order to get your English speech back on track, you need to do away with proper English pronunciation and start speaking using your native language pronunciation instead.

Yet there’s great wisdom concealed within such a technique, and I suggest you keep reading this article if you also experience unexplainable drops in English fluency every now and then!

There’s a widespread belief that one of the most important characteristics of a fluent English speaker is the ability to speak with native or near-native English pronunciation – be it British or American.

This premise is logically flawed, however. It is based on an assumption that proper English pronunciation is such an integral part of the English language that one’s fluency levels are directly linked to one’s ability to eliminate one’s native accent.

I can refute this argument in a few moments my friends, just playback the video below and you’ll see that a foreign English speaker can be completely fluent and still speak in heavily accented English ❗


Dr. Constantin Gurdgiev is a very reputable and highly regarded economist living in Ireland, he’s super-active in teaching and researching economy, and to be honest with you – I think he’s the most eloquent economist in Ireland. I’ve heard him quite often giving his opinions and interpretations of processes happening in Ireland and also globally during the financial crisis on TV and radio, and he’s always using the most fitting economy related vocabulary.

Just watch the video above, and I think you simply have to admit his English fluency level is that of a native English speaker – if not above that ❗

According to the supporters of fluent English = flawless pronunciation theory, however, Mr. Gurdgiev doesn’t fall under the category of fluent English speakers just because you can guess his Russian origins by his accent.

Personally I think it’s nonsense. You can’t paint all foreign English speakers with the same brush. Just because many foreigners will speak with you in broken English with a heavily accented pronunciation, doesn’t necessarily mean that this statement can be reversed. Heavily accented speech isn’t a sure sign of bad English, and it’s VERY IMPORTANT for you to severe the psychological connection between the two in your mind, if it exists!

So before we proceed to the next step, make sure you don’t feel embarrassed and uncomfortable diverting from the normal English pronunciation you’re used to.

Also, please bear in mind that you DON’T HAVE to force yourself to speak with an accent IF you feel it doesn’t come naturally.

The following technique WILL HELP you IF you sometimes get carried away with trying to speak with a perfect pronunciation and it starts hampering your fluency (you may not even be aware of why it happens!) and you feel that the words start blending together as you speak.

Accented Speech – Your Road to Recovery

Next time you’re experiencing a drop in your English fluency, find a few minutes of privacy for yourself and try the following – (it’s an excerpt from the original English Harmony eBook):

Forget about the English pronunciation and speak with your own accent!

This may sound really strange, but this is how it works: the elimination of English pronunciation will bring your spoken English performance closer to your native speech in terms of ease that you speak with.

Having spoken about 5-10 minutes in heavily accented English you should start experiencing natural fluency again so now it’s the right time to slowly do away with that heavy accent and start speaking in English as you normally would.

Remember – the key factors during the accented English speech phase is to maintain your natural speech rhythm as if you spoke in your own language and, if needed, keeping your speech at a slow pace.

However, you may find that following this method you’re capable of delivering a fairly fast speech. Personally I find that speaking like this I can maintain the fastest and most natural speaking pace. Isn’t it odd?

IMPORTANT! You may even realize that this new heavily accented English speech brings out the best of you, and you don’t even need to revert back to the old way of speaking. In this case you’re perfectly fine to retain your accented speech as far as it’s understandable to those English speakers you communicate with! So break the fluent English = flawless pronunciation stereotype in your mind and focus on how YOU feel when you’re speaking in English rather that what OTHERS think of your spoken English!

Over the years one’s English pronunciation changes, though. If you’ve been living in an English speaking country for a number of years you’ve had so much English speaking practice that your accent has inevitably become less distinct.

So as previously said, when you’re trying this accented speech technique you may find that you don’t really need to put on such a big accent to make this work.

In any case, try to speak for 5 – 10 minutes with yourself about anything that comes to your mind. But if you find it hard to think of anything you can talk about, here’s a list of spoken English topics you can always rely on to bring out the English speaker in you!

I believe there’s some connection between your ability to deliver an instantaneous speech and your native pronunciation.

You’ve spoken in your language since you were a child, and the respective sounds have been ingrained into your tongue, lips and palate. Speaking using your native language pronunciation like rolling r’s, not pronouncing l’s or pronouncing certain consonants very softly like in Russian is second nature to you and quite naturally it’s associated with speaking fluently and effortlessly.

When you learnt English later on in your life, you had to re-train your sound producing organs to make sounds that aren’t characteristic to your language – like English “r”, “th”, “w” and others. Of course, there are plenty of foreign English speakers who’ve achieved a near-native pronunciation and they also don’t have any issues with English fluency.

But then again – they wouldn’t be needing my advice because foreign English speakers who come to my website would have generally begun learning English at a later stage in their lives AND would be having issues with general English fluency and occasional fluency drops.

Anyway, when you learnt to pronounce English words with proper pronunciation, most likely it required some degree of effort from you. To some it comes naturally, but those who never fully acquire the British or American pronunciation are often hard pressed by their English teachers and peers to do their utmost to sound like a native English speaker.

Yet it rarely occurs to those perpetuating the stereotype of a foreign English speaker with perfect pronunciation that it may have a detrimental effect on one’s English fluency levels!

What if a particular English speaker performs best when speaking English with harder accent than he’s expected to? What if his or her optimal accent is somewhere in between his native language pronunciation and perfect English pronunciation?

Those are the questions that led to discovery of this accented English speech method, and those questions also give an answer to the general question – why this method works.

It works because it allows you to freely adjust to your personal pronunciation needs.

Sometimes a few minutes of heavily accented speech is enough to trigger your normal English fluency and then you can revert back to your normal way of speaking English.

Sometimes it may open your eyes to the fact that this accented speech is actually how you SHOULD speak despite what you’re led to believe.

And remember – shut off emotions like embarrassment or shame of your accent. It is part of your identity and no-one has any say over to what way you speak!