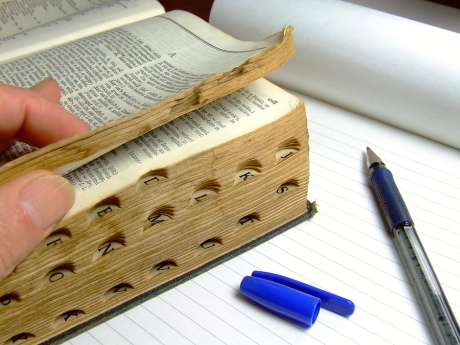 It’s hard to eradicate habits picked up over years upon years spent studying English in a traditional setting – textbooks, translation, plenty of grammar studies – you know the drill!

One of the most lasting effects of such English studies is the desire to figure out what EXACTLY a new English word means.

Let’s say, for example, you’re listening to a radio news broadcast and they’re saying that the death toll has reached two hundred people following a massive volcano eruption on some distant Pacific island (this is totally fictional, my friend, so don’t go looking up news online about a recent volcano eruption – you won’t find anything!)

So, the overall message is quite clear – two hundred people have lost their lives, and while you mightn’t know the word TOLL, the context reveals its meaning in an indirect way.

Here’s what should be going on in your head as you hear the sentence “…volcano … death toll reached 200…”:

VOLCANO + DEATH + TOLL … what the heck is TOLL? Will anyone help me out with this one, please? Tell me what is TOLL, I need to know what it is!!!

Here’s what I believe.

I strongly believe that any foreign English speaker behaving like this knows deep down inside what the word in question MIGHT mean, and they also get the overall message.

They simply like asking questions because it’s encouraged in a school setting, and this kind of behaviour carries on into the adult life making those folks question everything and anything that isn’t 100% understandable and clear-set.

Are you one of those folks?

Then keep reading this article and hopefully we’ll be able to deal with this problem once and for all!

You Don’t Need to Know the Exact Meaning of Words EVEN If You’re an Interpreter!

If you aspire to become an interpreter travelling with high government officials on their foreign visits and translate from and to English, the need to be super-smart, super-intelligent and know the exact meanings of very specific English terms is clearly exaggerated.

It’s a concept you may have imagined at some stage during your childhood or adolescence, and you still hold to it, but it’s all but a myth.

If you translate, more often than not you just need to know how this or that particular concept is called in your language or English, but you don’t translate word-for-word.

If I translate this phrase word-to-word in Latvian, it will still make sense, but it’s not going to be a natural construct for the Latvian language. To sound 100% fluent, however, I would have to verbalize the abstract concept in Latvian from scratch without even referring to those individual English words ❗

The direct translation of the word TOLL doesn’t even form part of the same sentence in Latvian!

So if you believe that translation happens like this: 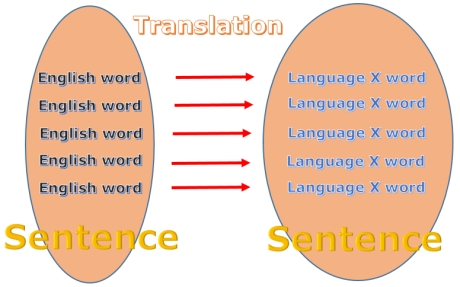 you’d better look at the drawing below: 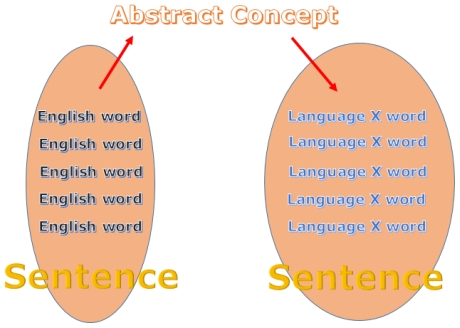 Basically the point I’m trying to make here is that when you express an abstract concept or an idea in any language, you have to think in that language and create sentences and choose words by operating that language ONLY!

So, did I convince you that even interpreters don’t need to know the exact meaning of English words because all they need is to be able to express the same idea precisely in the other language?

The More Precise You Are In Terms of Word Meanings, The More LIMITED You’ll Be in Using Them!

And let’s invite two fictional people to help us understand what I’m talking about in this article – Alberto and Franco.

Alberto is an English learning fanatic from Spain and he’s got five English vocabulary notebooks stuffed full with new English words he’s been learning over the course of a couple of years.

Every English word is explained very precisely in Spanish, and in case of the word having multiple meanings, each and every single one of those is also clearly defined using Spanish.

Franco, on the other hand, doesn’t use his native Italian when learning new English vocabulary. He’s writing new English phraseology in a notepad that he finds interesting and relevant to his personal, social and work life, and he’s not too concerned if he doesn’t know what exactly some English word might mean.

He’s happy to get the meaning from the context alone!

Franco has learned the following phrases containing the word TOLL over the years:

and he can use them quite comfortably in his English conversations. He doesn’t even suspect that the word TOLL in TOLL BRIDGE means a FEE – he just knows what it is every time he drives through one on a highway! And he wouldn’t be able to define the exact meaning of TOLL in “to take a heavy toll on” – he would simply use it when the right opportunity presents itself.

Poor Alberto, however, is struggling quite badly to wrap his head around the Spanish translation of the word TOLL because it provides a VERY GENERAL usage rules for the word:

Alberto is also struggling to use these words in his English speech, and you want to know why?

While Being Quite Precise, Exact English Word Meanings Are Also TOO GENERAL!

Tell me honestly, my friend – how does knowing that TOLL means a charge allow you to construct a sentence “I was driving through a toll bridge”?

I doesn’t! A fee, a charge is a precise enough translation, and it’s quite an EXACT one as well, but despite all that you just don’t know WHAT TO DO WITH IT ❗

And here’s the irony my friend – someone who doesn’t even know what TOLL means – like Franco – can use the word with a native-like confidence in their daily lives!

And now let me tell you something you probably won’t believe in.

Up until writing this article, I honestly didn’t know that TOLL means A FEE! I knew what a toll bridge was because I use it every time I go to the Dublin Airport to pick someone up (a friend or a relation of mine), but I didn’t have a clue that the word TOLL means A FEE.

I’ve stopped analyzing new English vocabulary a long time ago, and ever since contextual English learning has given me the ability to speak in English fluently, I will NEVER EVER learn the exact meanings of new English words!

And what about you?

Have you been using certain English words in your English speech without even realizing what exactly they mean?

I would love to find out what those words are – so please post your stories in the comments section below!