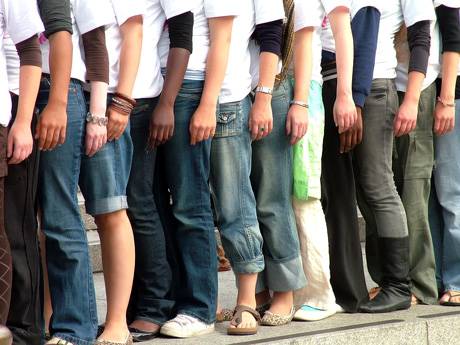 Have you ever heard a statement that people are inherently lazy? Personally I believe it to be true, more or less.

I believe that humans will put the minimum amount of effort into achieving their desired goal in any aspect of life. There are always exceptions to the rule, of course. By and large though, human beings will do everything to avoid engaging in activities that they don’t find entertaining or which don’t result in a direct, tangible benefit.

Are you outraged by my claims? Don’t be!

I meant no offence to anyone, I merely stated the obvious. They even argue that human laziness is the driving force behind the development of technology! We just got tired of walking and running around, so one day we thought – hold on, why not use some animals to carry us around? In no time we were riding horses, then driving cars – and all that because we’re too lazy to walk!

All, right, but what has it got to do with integration of foreign English speakers?

Well, if you consider that integration in local English speaking society goes hand in hand with good English communication skills; it’s got everything to do with it!

To put it simply – if foreigners aren’t REQUIRED to learn and improve English for PRACTICAL reasons, they won’t do it ❗

There you go. I said it! If you want to stone me, you’re free to do it in the comments below. If you’re prepared for an even bigger dose of truth spoken by a Latvian expat living in Ireland – keep reading!

I’ve been living in an English speaking country for eight and a half years, and during this time I’ve gained a very good insight into foreign national communities.

I know single lads, I know couples and I also know families with children across many different nationalities – Latvians, Russians, Poles and Romanians. Most of them are decent, hard-working people and you know what they all have in common? They face challenges of a practical nature on a daily basis.

Right after they arrive in Ireland, there’s a host of things to do before they can start enjoying normal daily lives. Finding a job, renting a house, opening bank accounts – all of it and much more needs to be done in order to become a fully functioning part of the local economy and society.

It’s logical to assume that these challenges would ensure that most of foreigners would dedicate themselves to English learning and improving so that they could fully enjoy being a part of local English speaking society. In fact, this rather sounds as taken out of some government agency website.

The reality is a bit different. My experience tells me that foreign expats living in an English speaking country will learn just the necessary amount of English to get by! And over the years I’ve come to a conclusion that it’s actually natural. Inherited laziness or being practical – you can call it whatever you want.

As I said in the beginning of this article – unless it’s exciting or practical, people generally won’t do it.

I’ve known a good few foreigners who’ve had the best intentions to learn English, but never really got round to it. Don’t have enough time, busy at work and tired at home, not god at learning – these and a hundred more similar reasons make a great excuse why not to learn or improve English.

I don’t judge anyone. If you think I’m writing this to show how good my English is and how stupid everyone else is – you’re wrong. It’s not what I think at all.

The point I’m trying to make here is the following.

I’ve been trying to improve my English since day 1 after arriving in Ireland because I’ve always liked English language and found the process exciting.

The average Joe who has little love for pastimes of academic nature (sometimes it can actually be a blessing!) won’t do it UNLESS there’s a really PRACTICAL need to learn and improve English.

The very same can be said about integration into the local English speaking society. Unless foreigners are forced to communicate with locals and start socializing with them due to reasons of PRACTICAL nature or because they’ve made friends with some locals, it’s very hard to enforce integration upon them. I mean – can you just take me by the hand and order me to go out there and start making friends with locals?

Generally we, foreigners, tend to stick together, and that means using our native language which is of course, crucial in order to maintain our cultural identity. Thanks to our inherited laziness, however, it also means not going the extra mile and not seeking out opportunities to communicate with English speaking people – unless, of course, for PRACTICAL reasons!

If the foreign English speaker is FORCED to communicate using English on a regular basis, it will work as a REAL motivator to learn and improve English.

If the foreigner works among other English speakers – he’ll naturally pick up new English words and expressions even if he doesn’t put any conscious effort into it.

If the foreigner works with locals, there’s a bigger chance they’ll go out together, make friends, and that’s when REAL INTEGRATION begins.

Using English at work, mixed nationality friendships and relationships, children going to school and USING English on a daily basis – that’s REAL integration. It goes hand in hand with using English as means of communication but still it all boils down to PRACTICAL reasons ❗

You can’t force integration upon foreigners!

That’s the bottom line. No government programs will force foreigners to integrate in the local society unless there’s a PRACTICAL reason for them to do it ❗

Most free English classes for foreigners will fail miserably if those foreigners don’t have to USE English in their daily lives; it’s really simple as that.

My wife, for instance, attended English classes a few years ago. She was willing to learn English but those classes did very little to actually improve her English. Why? She didn’t work at the time, and she didn’t use English in her life other than just reading her English notes!

As I told you previously, we foreigners tend to stick together, so she had very little contact with English speakers. Now she’s conversationally fluent in English and you know why? Yes, because she’s been using English at work for a few years! By the way – she hasn’t spent a single minute sitting at an English grammar book…

Well, I was in the same boat for years with no real communication opportunities, but then I can hardly expect an average foreigner to have so much motivation (which sometimes borders with insanity!) as to speak with themselves to practice spoken English. Yes, thanks to my relentless pursuit for English fluency I was doing everything I could to learn and improve my English, but at the end of the day, it all comes back to being motivated.

I fell in love with English language with I was a kid and I never gave up; the average Joe will do what’s practical and do the necessary minimum to get by.

So I’d say the whole integration thing will take care of itself no matter how hard others try to control it. Those foreigners who aren’t interested or motivated to hang out with locals and form relationships will stick with their own. Those who make friends with English speakers will integrate in the local society and use English for PRACTICAL reasons, not because some government agency tells them to!

Don’t you think so? Tell me what you think in the comments box below!

P.S. Do you want to become as insane as me and start improving your spoken English by doing speech exercising in front of your PC or laptop? Then check out my English Harmony System HERE!