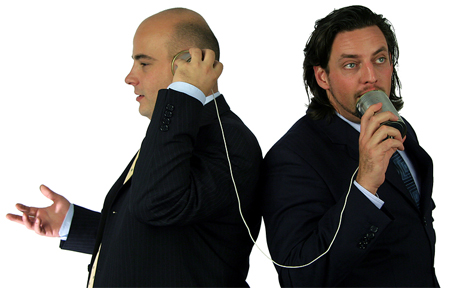 In this blog post I’ll be looking at one of the most dreadful things foreign English speakers come across – making MISTAKES.

You might know the feeling – you start talking to someone in English, and then all of a sudden you make the most stupid mistake! And despite being a decent English speaker, the mistakes you make may create an impression that you’re just an English learner. It’s really irritating. It’s frustrating.

Making mistakes like saying “he” instead of “she” or mixing up tenses and saying “had” instead of “has” should be something that only beginners do, isn’t that right?

Yet it’s something that can happen to any of us no matter how fluently we speak!

I’ve discussed this phenomenon at length on my blog previously and given plenty of advice on how to deal with those moments when you feel that you just can’t speak normally.

At times there’s nothing better than just jumping into an English conversation and ignoring the mistakes you’re making. If it’s bound to happen, accept it and let go of the very fear of making those mistakes! Strangely enough, on many occasions it works. Having spent a few minutes chatting and forcing yourself to draw away your focus from mistakes to the conversation itself, you alleviate the self-imposed stress and your English fluency returns to normal.

If it doesn’t help, you have to resort to another powerful tactic I’ve suggested previously on a number of articles and videos – slowing your speech down. On many occasions foreign English speakers are trying to match the speed of native English speakers’ speech and it can have quite the opposite effect. You may start stumbling upon words and make terrible mistakes just because you’re rushing your speech, and slowing down and pausing to pick the best fitting word is definitely a good idea.

And sometimes when you’re so overwhelmed by the inability to speak normally, the best thing you can do is just forget about English for a while! Immersion in other activities allows your mind to “restart” itself and you can return to a normal English speaking mode the next day.

There is, however, one aspect of making mistakes when speaking English that I haven’t yet touched on my blog.

It’s about GETTING INOLVED when speaking.

Don’t Speak Passively, Do It Actively!

“Hold on Robby, what you mean by “speak actively”? Doesn’t the very fact that you speak indicate an active involvement? Is it even possible to speak “passively”?”

It is! Every time you are focused more on HOW you speak and WHAT you say instead of just SPEAKING WITHOUT THINKING, you’re not fully involved. You’re taking on an observer’s role and you’re kind of looking at yourself from a distance.

You’re analyzing your speech and your subconscious mind already anticipates mistakes so you become more prone to making them! And, of course, stress also plays a crucial role in the process because normally when you speak to people you’re familiar with, you’re so much less likely to make mistakes.

But it’s not unlikely for the English fluency issue to occur whenever it wants to, and it can also happen when you talk to close friends. You can become super self-conscious, start analyzing your speech, become like a third-party observer and there you go – you start making mistakes one after another!

I know it’s easy for me to tell you – you have to avert your mind from technical aspects of your speech and stop thinking about what you’re saying, stop thinking what grammar tense you have to use and so on. I know that in real life it’s not easy at all and it requires focus and effort to open up your full potential and start speaking automatically.

But that’s why I do – I’m providing you with advice and it’s up to yourself to implement it, it’s all in your own hands! I can’t make it happen unless you don’t take action so I’ll give you two steps you have to take in order to lose your focus on what you’re saying and stop being self-conscious.

This may sound contradictory to my advice about slowing down your speech and picking the words with care. Well… it is! It is quite the opposite of that technique yet sometimes it works. Don’t ask me why it does – it just does, all right? 😉

So what you have to do is – when you feel that you are focused on the technical aspects of your speech to a degree that it inhibits your fluency – speed up your speech a little. You may be speaking too slowly and the extra time you gain is used by your mind to over-analyze your speech!

Of course, there’s also a factor of substance involved here. If you’ve nothing of a substance to say, this strategy won’t do the trick. In case you’re asked a question that requires knowledge of a certain subject you simply don’t possess, you won’t be able to give a sound answer no matter how fast you speak. In this case you’re indeed much better off taking a pause, reflecting on the matter and giving an honest answer instead of trying to say something smart very fast and mess it all up as a result.

Sometimes you have to realize that English in your life is different from English used by others and moments when you can’t give an immediate answer to a question don’t necessarily signify lack of fluency.

By and large, however, speaking just a little bit faster may break the barrier standing between you and your conversation partner.

Step #2 – Use Your Body Language

Watch my video episodes and you’ll see how extensively I use my hands to help me convey the message.

At times I’ve thought I overdo hand gesturing and I’ve tried to keep my hands down to see if it makes any difference. And you know what? It does make a big difference indeed! I can’t put on as effective a performance as normally and all because I don’t use my hands along with my speech ❗

So no matter what others might think about you gestures – try to use your body language when you speak and I’m pretty sure it will help you being more involved during a conversation.

It’s a well known fact that body language makes up a big part of the message you’re sending during a conversation, and I believe that the two elements – verbal communication and body language support each other. In other words, if you feel your verbal message lacks fluency and clarity, there’s a big chance you’re all tensed up and you don’t allow your body to add the much needed liveliness to your speech!

I dropped into a podiatrist’s the other day to enquire about verruca removal. I’d never visited the place before so I was just a little bit tense. And just as I opened my mouth to explain the issue I made a really silly mistake. For a reason I can’t explain I said “I had…” instead of “I have…” You may think it’s not such a big mistake after all. Still, I clearly knew what I had intended to say and I realized that I was too tense. I had to get more involved to engage into a normal conversation!

What I did is exactly what I suggest in this blog post.

I forced myself to speak up and increase the speed of my speech. I put on a very friendly behavior and started using my hand gestures to help open up my potential as a fluent English speaker. I forced my mind to shift the focus from the speech itself to the matter I wanted to discuss and I got myself completely involved in the conversation!

P.S. Do you want to learn how to get fully involved when chatting with other English speakers? Check out my English Harmony System HERE!