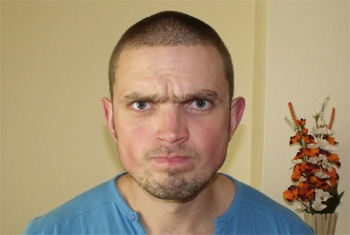 Let’s say you’re having a conversation with a native English speaker whom you’ve met for the first time. It could be a sales assistant in a shop, or a member of staff in McDonalds. You’re being asked a question, and you’re taking a few seconds to think on it. And here’s the thing that annoys me a lot – on many occasions the native English speaker mistakes your moment of silence for lack of English understanding when you’re actually thinking over the very question asked! 😡

Please forgive me, native English speakers, if I’m being unfair to you but I just want to discuss this issue at length in this blog post as I feel it might be not just me who sometimes feels the same way.

Here’s a real situation I had last summer when I was visiting one of costal towns on the south cost of Ireland. I had just parked my car near the seaside and was looking for the parking ticket machine. Eventually I found out that parking had to be paid in a nearby souvenir shop so I walked in and asked the lady where and how I could pay for parking. She asked me how long I was going to stay but I didn’t give a straight answer because I started thinking over her question.

The lady from the souvenir shop, however, didn’t wait on my answer. Instead she repeated her question using very simple and slow speech involving hand gestures. It was very much the same way you’d speak to a deep-jungle tribesman who’s seen a white person for the first time in his life! Apparently she thought that I didn’t answer her question because I didn’t get was she was saying – not that I was just thinking over the very question and trying to decide how many hours I was going to pay for!

Frankly speaking, I hate when my level of English is judged is such a generalized manner. It’s kind of – if he didn’t answer instantly in perfect English, most likely his English is so poor he didn’t even get me! 😡

I totally understand that it’s not meant as an offence. Most likely those native speakers get to talk to many foreign English speakers whose English is terrible indeed. Ireland has been very popular as a migrant worker destination during the last eight years or so, and yes, I have to admit that many of us, foreigners, haven’t put enough effort in improving English. I’ve always held the opinion that if you live in an English speaking country, it is common sense for you to speak English, both for social and personal benefits.

If You Allow Yourself Becoming Angry – You’re Done…

One way or another, such embarrassing moments can and DO influence confidence of those foreign English speakers who can speak English at a pretty decent level.

In a natural conversation, if either of the parties involved doesn’t understand something, they just ask to repeat it, or to explain it. The simplest way to make clear that you didn’t get the question is to respond to it with a simple ‘Sorry?’ What is a normal reaction when two native speakers have a chat and one of them pauses a bit before responding to the question? Of course, the other person wouldn’t start explaining the point all over again as it’s quite understandable that the person who’s answering is taking time to think on what to say, simple as that!

But when the other party is a foreign English speaker, sometimes the native speakers can behave in a different way. The native speaker could make an assumption that your English understanding is no so good, so he tends to react in a way that is probably meant to help you, but actually can impede your speech and get you confused. The person may have the best intentions, but actually they’re being a bit biased, in my opinion.

What any native English speaker should assume when speaking to a foreigner is that he or she will follow a natural conversation pattern. So if the foreign English speaker doesn’t get something, he’ll make it clear. I don’t think a few second pause before a reply can be taken as a certain sign of lack of understanding!

Nonetheless, we foreign English speakers can’t change ways of the natives, and I’m not saying anyone should. There’s no point to it as you can only get yourself in an unpleasant situation by trying to prove that your English IS good and that you understood what you were asked.

The aim of this blog post is to make other foreign English speakers aware of such situations and how to handle them.

So here’s what you should do whenever facing a native English speaker who doesn’t read your reactions during the conversation in a normal way (by the way, it can happen even with people you speak with on a regular basis!)

What Steps To Take In The Emergency Situation

First of all, quell any irritation that you may notice emerging inside you ❗ If you allow yourself getting annoyed, you’ll instantly reduce the ability to respond to the question in fluent English.

It’s not uncommon for anyone to lose some degree of control even over your native language under stressful situations. So you can definitely experience hesitation and stuttering when responding to a question in a conversation where the native English speaker has made it clear that he feels your English is poor.

So just take a deep breath and focus your mind on the actual point of the conversation by shifting your attention away from the problem of being mistaken for someone who can barely speak and understand English. It won’t avail you of anything if you start explaining that you understand what you’re being told and that there’s no need to speak slowly.

Allow the other party to make their own judgment about you simply because it’s not going to make any difference whether the sales assistant in a supermarket thinks your English is fluent or not. Who cares if a nightclub bouncer repeats to produce your proof of age thinking you didn’t understand him the first time and starts using his hand gestures to help expressing his point?

If you think about it deeper, it rather makes sense to keep cool head and behave as if nothing has happened. Suppress any emotions that might get you irritated, annoyed and angry. Ignore the other person’s behavior if they adopt the slow, childish type of speech. If the conversation is going to last long enough, they’ll figure out your English is actually quite good and they’ll start speaking in a more natural way. If the conversation ends after a few sentences – you really couldn’t care less! Just forget about it!

Thing number two ❗ Never EVER try to speed up your speech and pretend you can speak super fast in order to prove that person that you can speak really, really well. It’s very easy to fall for the temptation because trying to prove that the very opposite is true is quite a natural and human reaction. You think I can’t speak English? You’ll see now how good I am – listen how fast I can actually speak!

On way too many occasions I’ve had my speech completely messed up when trying to sound too good when talking to native English speakers. But it’s simply not worth it because the person you’re talking to heard you’re a foreigner from your first sentence anyway! So there’s no way you’ll sound native no matter how hard you try – and THAT will sound really ridiculous if you do! I’ve made this mistake over and over again until I realized two things.

I’ll never sound native AND there’s no point in sounding native! We all are who we are and by trying to pretend being someone we aren’t can only make things worse and make us into objects of derision.

If your query in a bank on opening a new bank account is countered by something like: “Do – you – want – current – account – or – savings – account?” just because you’re taking a few seconds to think on which type of account you actually need, don’t try to say something smart in order to impress the girl behind the counter. Just say something simple like: “Sorry, let me think for a second.” Or say something that would allow you to take the extra time like “Well, I’m not actually sure.” And then try to focus on the actual issue and explain why you can’t decide on which account type you need: “I’m not sure if I can use savings account for paying direct debits and standing orders. And also could you tell me if my salary can be paid into a savings account?”

So instead of focusing on convincing the girl behind the bank counter on quality of your English pay all your attention to the actual crux of the matter. Dismiss all thoughts like: “Why does she think I don’t get what she’s saying? Do I really sound so bad? Is my English really so poor?” At the end of the day all that matters is whether you get the needed information out of the conversation – NOT what other people think of your English ❗