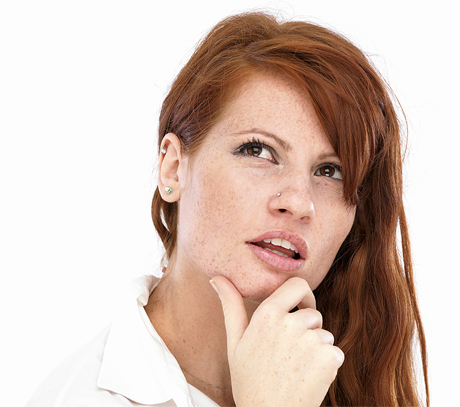 You may like it or not, but every English speaker – be it native or foreign – is bound to hesitate at some stage during a conversation. While excessive hesitation is a sure sign of an English fluency issue whereby you constantly keep mixing up things in your head while speaking, in moderate amounts it doesn’t indicate any serious fluency problems.

It can also happen when you speak in your native language, so you don’t have to feel as if you’re unable to communicate in English properly just because your brain doesn’t fire on all cylinders on this particular day. Some will probably judge your spoken English skills by those occasions when you hesitate a little bit, but you shouldn’t really mind them or else you risk putting your sanity on the line ❗

Anyway, there is something that any foreign English speaker should know about hesitation if they want to sound natural, so read on if you want to find out how to hesitate like a native English speaker! 😉

Why Use Hesitation Fillers?

You must have often heard about how important it is to be able to formulate your thoughts clearly and coherently when speaking in English, isn’t that right?

It’s nearly as important, though, to know what to say when you have a pause in the middle of a sentence ❗

You might not be as fluent as a native English speaker, but if you know how to use such hesitation filler words as ‘well’, ‘you know’, ‘you see’ and others, you are so much less likely to experience awkward moments of silence which would most likely send a signal to your conversation partner that you’re stuck in the middle of a sentence and that you don’t know what to say.

As a result, the person you’re speaking with will take initiative in their own hands in terms of conducting the conversation and that will leave you feeling frustrated and unsatisfied with your spoken English performance.

So if you know how to use these simple gap filler words and phrases properly, you can save yourself loads of frustration.

Imagine that you’re having a formal conversation (yes, you can certainly use these hesitation fillers in a more formal setting as well!) with a customer at the information desk in a shopping mall you’re working at, and the customer asks you: “Can you tell me, please, if there are any shops in this mall selling sports memorabilia?”

You’re starting your reply with “Yes, you can get all sorts of sports memorabilia in …” and then you suddenly forget the name of the shop. You know the way it happens sometimes – you just can’t remember the simplest things, so you’re trying to bring back the shop’s name while the customer waits.

You have to admit that if you don’t say anything to fill the silence while you’re trying to remember the name of the shop, it would turn into an awkward situation. The customer would be staring at you expectantly and you’d be frowning back at him and he wouldn’t have a clue whether you trying to remember something or you’re experiencing a sudden toothache…

Your response could be the following – “Yes, you can get all sorts of sports memorabilia in … what do you call it… Hold on… I have it right there… Yes! It’s called ‘Collector’s Paradise’ and it’s located on the second floor down at the very back of the mall!” This way you can buy more time while you’re trying to remember the name of the shop, and most importantly – you’re avoiding the awkward silence!

Another benefit of using such hesitation filling words and phrases is in binding the words together in a sentence. Even if you’re not trying to buy more time to remember something specific, you’ll still find yourself pausing between sentences as you speak, and you’ll also sometimes need to choose the best way to put a certain thing to your conversation partner.

Even a simple sentence “I don’t know” will sound so much more better if you begin it with “Well… I don’t know!” or else you run a risk of making sounds like “errr…” or “ahh….” or even use sounds or short exclamation words in your own language which probably wouldn’t go down well in a more formal setting, say, a job interview.

I have actually heard some foreign English speakers use their native language while they’re trying to think of how to say a certain thing in English and I have to say it does sound weird… It’s definitely worth making it your habit to use ‘well’ and ‘like’; even if you use them excessively, it will still sound ten times better than saying something that your conversation partner doesn’t understand at all!

It’s worth noting that these hesitation filler words I’m going to give you in this blog post are different from the small talk phrases I published some time ago. While technically you can use some of those small talk phrases to fill awkward pauses – like “that’s a good question…” or “to be honest with you…” – the phrases below are very specific in that they serve only the purpose of filling a pause in your speech and for the most part they’re very short – just a couple of words long.

So here are typical English words and phrases you can use to fill a pause while you’re trying to think of how to continue the sentence that you just began OR you’re about to begin and you just don’t know how to start it best.

Well… – probably the most popular English word used to buy time while considering the question you’ve just been asked. So if you have a habit of making a simple ‘eh…’ or ‘ah…’ sound to fill gaps in your speech, I’d definitely suggest starting using ‘well…’ instead.

“You’re half an hour late today, did anything happen?”
“Well… (thinking on whether to reveal the whole truth) I was out last night and simply forgot to set the alarm clock!”

You see… – this filler phrase comes in handy when you’re explaining something to the person you’re having a conversation with and you’re hesitating a bit while thinking on how to explain the whole thing in detail.

“Robby, how come you still haven’t created a Mac version of your English Harmony System 2.0?”
“You see… (thinking about the arguments to present in order to explain the issue) Actually it’s quite an expensive process and that is what’s been holding back my plans of creating the System’s Mac version!”

All right… – normally you’d use this phrase as an affirmative reply. But it can also be used as a hesitation filler while you’re coming up with the best way to put it into words.

“Jessie said she wouldn’t attend the meeting today, so I’m not sure if there’s any point in having one today.”
“Jessie’s not attending? All right… all right… (accepting the fact and considering the consequences) I guess we have to call the meeting off indeed!”

I see… – this short phrase literally meaning “I understand” works as a self reassuring mantra you can also use to fill the void while you’re dwelling upon the matter at hand; it’s very similar to the previous one – “all right”.

“I’m not sure if we can push the order through today, we haven’t enough capacity to manufacture all the necessary parts.”
“So you can’t make up the entire order today… I see… I see… (thinking on a possible solution to the problem) Well… Can you finalize the parts that have been manufactured by now so that the customer gets at least something?”

You know… – this very common English short phrase “you know” isn’t really used to fill awkward pauses; it’s normally added onto the end of a sentence to make the conversation more casual – “Drinking has always been Jim’s way of dealing with problems, you know?”

But it can be used as a hesitation filler just as successfully:
“Is this all you could accomplish with the new machine?”
“Well… You know… (overcoming the need to be defensive and thinking on how to explain the situation) I haven’t received formal training on this machine so I had to figure it all out myself!”

Like… – this word is used so frequently in spoken English that many consider it a bad habit – and indeed, on many occasions it is used excessively – “And then she was like “What else do you want me to do?” It’s like she’s making me responsible for her choices, like.”

As a pause filler, however, the word ‘like’ is brilliant and it can be used just like the previous one – ‘you know’.

“Do you know why Jack got into a fight last Saturday?” (if you’re wandering why I didn’t say – “Do you know why DID Jack got into a fight” – read this article about embedded questions!)
“We had a few drinks in a bar, and then he became like… (considering which words would better fit Jack’s description at that time) a completely different person! He started making stupid comments about others and that’s how it all started.”

What do you call it… this filler phrase can be used while you’re trying to remember a word or a name that’s just slipped your mind.

“Has the … what do you call it… courier delivered the package yet?”

* You can follow up all these hesitation fillers with sounds like “ahhm…”, “ahh…”, “ehh…” and it’s nothing to be ashamed of. In real life you’ll be pronouncing the last letter of the hesitation filler very long – “welllllllllllll….” and right after that – if the pause hasn’t ended yet – you may add the “ahh…” or “ehrr…” sound if appropriate. It will, in fact, come naturally to you and you’d have to work pretty hard NOT TO use such sounds while hesitating! 😉

* You can repeat the question you are asked at the start of your reply to buy even more time.

* You can also – and this is VERY IMPORTANT for spoken English fluency! – start a new sentence right after the pause; you don’t necessarily need to continue the same sentence:
“The reason why it happened is… well… it’s actually hard to say!”

Many foreign English speakers strive for perfection so they’d try to finish off the sentence they’ve started, but on many occasions it’s simply not possible because you don’t know what to say or a new idea crosses your mind.