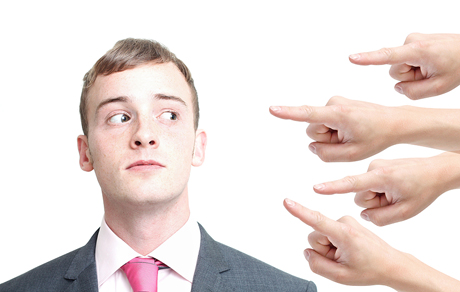 “I’m pretty sure you meant “coarse language” instead of “hoarse language”, which is not the correct way of using this word. You must have mixed up the two words – “coarse” and “hoarse” – they sound similar but mean different things!”

All such and similar corrections are nice, but did you know that sometimes such well-intentioned advices can actually do more harm than good?

It can happen indeed – especially when accompanied by arrogant behavior and that superior look in the eyes which says “I’m a much better English speaker than you are, so just listen to what I’m telling you and don’t you dare to speak such incorrect English in my presence!”

Even if it’s not meant to sound condescending, it can still hurt ❗

Most of us, foreign English speakers, are ALREADY AWARE of the small mistakes we’re making in our daily conversations. The thing is – it’s not so easy to stop making them and sometimes you just can’t help it!

So when someone points out that you just said something wrong, and you already know it yourself, it might really upset you – and others, for that matter – if it’s you giving generous advice to someone else.

Anyway, I’m not trying to sow hatred here against those genuinely desiring to help other English speakers to improve their English fluency.

In this blog post I’m trying to explain to those who haven’t experienced all sorts of English fluency issues, how it feels when you are already mad AT YOURSELF for making a mistake 😡 … And then you have to hear it from others!

This is a great piece of advice, isn’t it?

It’s easier said than done, though.

It’s easy to remember not to treat others the way we don’t want to be treated ourselves if we’ve been treated badly ourselves. Imagine you’ve been having a hard time today at work or at school, and for some reason or another your English hasn’t been flowing freely. You’ve received quite a few corrections on your mistakes and every time it happens, it gets on your nerves more and more.

Now, would you care to point out if someone else makes a small mistake? Most likely not, because you can imagine how that person probably feels so you just leave them alone.

If you happen to be among the lucky ones not having any English fluency issues, you may assume that any mistake made by other English speakers is a display of lack of knowledge and that you’d do them a favor by pointing out the correct way of saying the word, phrase or sentence in question.

You may not even make these assumptions on a conscious level, but then we, humans, are notorious for not behaving rationally most of the time.

Even worse – we may have gone through tough periods in our own lives, but when it’s over, we may become oblivious to the suffering of others, even if it should serve as a reminder of our own painful experiences in the past.

For example, you may have struggled with your spoken English performance for a long time, but when you finally achieve the fluency you’ve always dreamt of, your subconscious shuts off those memories because they’re a constant reminder of the time when mistakes and embarrassment were a normal part of your daily English conversations.

So part of you might even WANT to point out mistakes others are making just to prove that you don’t make them anywhere near as often as you used to!

Sometimes Foreigners Will Say It Wrong
Being Fully Aware Of It!

There are two types of foreign English speakers in this world.

Here’s how you can tell them apart.

If you hear a person speaking incorrect English and making the same mistakes a couple of years after hearing them for the first time, it’s a sure sign they haven’t made any effort to improve it.

The ones who make effort, would have noticeably improved their English and you’d think to yourself when listening to them – “Well, she’s speaking so much more fluently now!”

The weird thing is – both types of foreigners might be very well aware of the mistakes they’re making, and they might very well know what the correct way of saying the particular thing is. Why don’t they?

Embarrassment, fear of trying something new, fear of making even more mistakes, fear of sounding stupid – to name just a few of insecurities that are holding back foreigners from making the effort to speak correctly. And of course, there’s various English fluency issues when you just say things wrong because you keep second-guessing yourself and preparing speech in your head beforehand.

Now, think about how stressed out you would be if all the above applied to your spoken English (and it very well might be the case just like it is with so many of my blog readers).

Think about the fact that every time you hear a well-intentioned advice on how to speak correctly, it might seem like a constant reminder of your mistakes and failures. Every time you’re told – “Sorry, but you said it wrong. It’s actually …” – it sends a subconscious signal to your brain – “Sorry, you just made a mistake again. Sorry, you’re a loser!”

So how do you go about this delicate question?

4 Pieces of Advice On Pointing Out Mistakes

1. Don’t point out a mistake by telling your conversation partner what the correct way of saying a certain thing is if you don’t know him or her well. Strangers having just met on the street, people you know for 5 minutes, work colleagues you barely speak with – keep your good advices to yourself because you just don’t know how they’re going to react to it!

2. Don’t POINT OUT a mistake. Phrases such as “Sorry, the correct way of saying…”, “You just made a mistake there…”, “Sorry, you pronounced it wrong…” may sound very condescending even if they’re not meant that way.

Instead make the point to say the particular word or phrase the correct way in your response! That way you’re letting the other person hear the correct way of saying it and now it’s up to him or her to absorb that information.

What they choose to do with it should be none of your business, sorry!

3. It’s important to be aware of how to react to your OWN mistakes. Even though on many occasions it’s hard to help not to badger yourself for saying the wrong thing, your attitude towards noticing your own mistakes shouldn’t be different from how you’d treat others.

Instead of freaking out every time you use the wrong English Grammar Tense, pronounce a word incorrectly or choose the wrong word, try letting it go instead. FORCE YOURSELF to ignore your mistakes, because the more you think about them, the more conscious of your own speech you’ll become!

4. Lastly – if it is YOU who gets that good advice on how to say something correctly in English, try not to take it personally. Remember that for the most part native and also foreign English speakers are simply willing to help.

Yes, you can’t always avoid those perfectionists who’ll point out your mistakes just to feel better about themselves, but believe me – they don’t make up the majority of people around you.

The best you can do is – ignore downright arrogance but put genuine advice to good use!