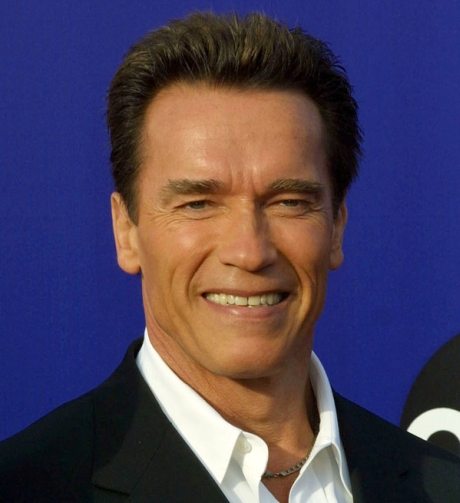 Well, I’m pretty sure I don’t have to be telling you that Arnie’s a former bodybuilding champion having won Mister Olympia title seven times.

His acting career and his trademark catch-phrase “I’ll be back” from the Terminator franchise is also something that EVERY person on the planet has heard of.

OK, I’ll admit he mightn’t be THAT popular nowadays among teenagers for the simple reason that new actors are constantly replacing the older ones and jacked up guys like Chris Hemsworth, Jason Statham, Hugh Jackman and dozens of others have claimed their place in the Hollywood action film scene.

You can’t deny, however, that for as long as Arnie is alive and kicking – and also beyond – he’ll be known as one of the most successful and iconic people on the planet.

He’s a foreign English speaker – just like you and me!

He’s been ridiculed because of his accent, he’s lost the count of times he’s been told to stop pursuing his unrealistic dreams and did you know that up until his early twenties he didn’t speak any English at all?

It didn’t stop him to pursue his dreams, however.

He didn’t give a damn about his lack of English skills or his terrible Austrian accent.

He focused on his dreams and goals eventually becoming the Governor of California (which is, believe it or not, the ninth largest economy in the world!) – and all that despite him not being a native English speaker!

Fair enough, me or you aren’t like Arnie, but there’s still a lot we can learn from him! 😀

There are people who strongly believe that once you’ve past your adolescence, there’s no way you can learn a foreign language to a degree of proficiency to rival that of you native language.

I’m pretty sure if you asked those people (scientists, linguists, whoever they may be…) the following question:

Can a 20 years old foreigner whose English is virtually non-existent, learn the English language to a level availing him to become a successful Hollywood actor and Californian Governor?

… they would be laughing at you!

They would most likely say:

No way! Once you’ve past your teenage years, your language learning capacity is rapidly declining and it’s not feasible to learn English at the age of twenty to achieve such ambitious dreams!

Well, Arnie’s life flies in the face of the critical language acquisition theory, and he’s proven something that those scientists will probably never understand.

If you’re WILLING enough, you can achieve ANYTHING.

You can defy any rule of nature and science, and just make things happen.

If you don’t focus on English grammar and don’t spend your entire time filling in gaps in textbooks but instead live your life through the English language, your language learning curve is going to be 10 times faster.

I’m sure if Arnie was focused solely on his English improvement before he tried to make his other dreams come true, he’d still be probably poring over advanced English grammar textbooks in order to learn everything there is to know (it simply stands to reason that it’s just impossible to learn EVERY grammar aspect and EVERY English vocabulary word; our lives are just too short!)

… focus on goals (his acting career and civil service) rather than what’s needed to achieve those goals (excellent level of English). Had he been focused on the latter, he would have probably never achieved his primary goals; focus on the former enabled him to achieve English fluency at an accelerated rate.

When Arnie just started his acting career and got his first role in the film Hercules in New York, his Austrian accent was so thick it’s actually quite hard to make out what he’s saying.

You may want to check out this video with highlights of Arnie’s speech from that film:


Please note that Arnie’s 22 years old at the time of making the film – so it was quite clear to everyone there was no way he’d ever learn to speak JUST LIKE a native English speaker in terms of accent and pronunciation (this is something I have to agree on – while it’s totally possible to achieve fluency in English in your later years, native-like pronunciation is a different kettle of fish…).

It would discourage just about ANY typical foreign English speaker from trying to achieve any proficiency in the language; their reasoning would normally go something along these lines:

Arnie didn’t give a damn.

He improved his English pronunciation to an OK level (so that people can understand what he’s saying), and that’s all that was needed for him to succeed in life!

It’s totally possible to be fluent and speak with a foreign accent; Arnie is a living proof of that and even more – he’s used his Austrian accent very successfully as a trademark accent to distinguish himself from other native English speaking actors, and it’s actually worked to his advantage!

Of course, we’re not movie actors, but the very concept of not being ashamed from your foreign accent for as long as you’re understood is VERY IMPORTANT.

Arnie’s Lesson #3: Confidence Is ALL You Need to Succeed!

Was Arnie the biggest and most shredded bodybuilder of his time?

Nope! There were bigger and more muscular guys competing on stage, but Arnie beat them all with his CONFIDENT DEMEANOR. He impressed the judges with his stage presence and looked bigger than he was – and all thanks to his winner’s mindset.

Is he a very talented actor?

Nope! His acting skills are arguably just above average, and he would definitely not have achieved anything in Hollywood if he tried to beat native English speaking actors in their domain. What he did instead is the following – he created his own niche (a muscular, no-compromise macho man going around crushing people’s skulls) in the movie industry and dominated it for a decade!

Is he a super-intelligent human being?

Nope! But he never strived for perfection (perfection is a dead-end; you may waste your life trying to become perfect in some field and miss ALL other opportunities!) – he just wanted to achieve what he’d envisaged and that’s all.

His CONFIDENCE has always been the common trait in whatever he’s trying to achieve in life, and that’s the critical characteristics determining his success.

Now, what you and me can learn from it?

… but you will still suck at everything…

… if you don’t ACT CONFIDENTLY!

So, take these 3 lessons from Arnie on board, and you’ll see how much difference those concepts make in your life!