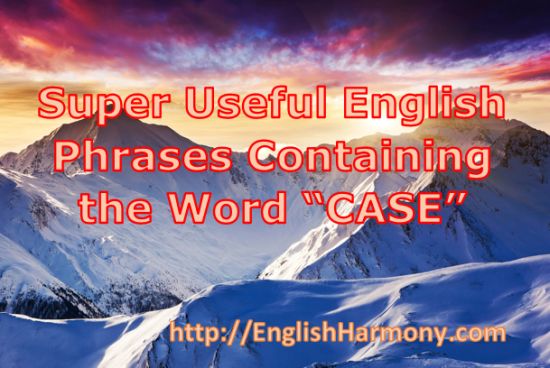 You may not have thought about it, but the fact of the matter is that the English word CASE is used in an awful lot of different English phrases that are applicable to a wide range of situations in life!

Well, if that’s the CASE, I’m going to have to try and convince you, in which CASE there’s no better way of making a CASE than giving you a sentence just like this one!

Now, did it work?

Or maybe you’re not convinced?

Well, in either CASE you have to admit that whatever the CASE may be, the word CASE is indeed quite useful in making your point.

There’s a whole lot more useful English idiomatic expressions containing the word CASE worth knowing, and in CASE you’re wondering what they are, just keep reading this article and you’ll find it all out!

Conversational phrases are the ones that can be used whatever the context, so they’re the ones you can use in pretty much any life situation provided that the phrase fits the statement type which could be a statement, a question, a response and so on.

In CASE – this is by far the simplest English idiomatic expression containing the word CASE! Typically it’s used in situations when you’re giving advice to someone as a precaution to something that might happen: “I think you should definitely memorize my phone number in CASE you lose your phone!”

Just in CASE – probably the first English idiomatic expression that most people would think of! For those unaware – typically it’s used to warn someone of some unforeseen circumstances, for example: “Yes, I know the weather is quite warm, but still you should pack the warm socks with you, just in CASE!”

In any CASE – this English phrase with the word CASE simply means “no matter what happens” and it can be used the very same way you’d use the adverb ANYWAY. Here’s an example to illustrate its usage: “Alright, I get it, you mightn’t be able to see me tomorrow. In any CASE, I’ll give you a call to see how you’re doing.”

Whatever the CASE may be – this expression may sound similar to the previous one – in any CASE – but in reality it’s got a slightly different connotation. While the previous one is more like redundant speech (things we say just for the sake of saying them), this one serves a bigger purpose and is used when you’re telling someone what’s going to happen whatever the circumstances: “It might rain next week, or it could be snowing, we can’t know for sure. Whatever the CASE may be though, we have to make sure deliveries go out on time every day!”

In the unlikely CASE – this idiomatic expression is also used when talking about unforeseen circumstances, only in this CASE (see how useful the word CASE is?) the usage is slightly different. While the previous phrase is used at the end of a sentence, this one is most likely to be used in the beginning: “In the unlikely CASE of freezing temperatures it would be wise to pack the warm socks with you.”

If that were the CASE – this one might sound confusing at fist – why the hell should we say “if that were the CASE” instead of saying “if that was the CASE”, right? Well, guess what? This is the so-called subjunctive mood in action which dictates that when we talk about something hypothetical that might have happened in the past (but it didn’t happen!), then we have to use WERE instead of WAS. And here’s an example: “There’s no way my sister did it! If that were the CASE, she wouldn’t have called me right after it happened!”

If that’s the CASE – unlike the previous expression, this is a typical way of starting a sentence in English when you’re told some actuals facts (not some hypothetical assumptions!) and you’re responding to that by explaining the consequences: “Listen, I can’t go to work tomorrow, I’m still not feeling well!” – “Well, if that’s the CASE, you have to go see a doctor!”

… in which CASE – for those who are struggling to connect their thoughts when speaking in English, this phrase will come in really handy! It can be used in pretty much the same circumstances as “If that’s the CASE” – except for the fact that now you’re not responding to someone else but instead you’re making the statement all by yourself: “I understand Mark is unable to go to work tomorrow, in which CASE he definitely has to go see a doctor!”

It’s not the CASE – this is a great way of saying that something isn’t true: “You think I got the raise that my boss promised me last year? Well, it’s not the CASE!”

It’s often the CASE – this idiomatic expression is quite the opposite to the previous one in that it’s used to make a frequency-related (as indicated by the word “often”) affirmative statement as opposed to a negative one: “It’s often the CASE that people make false health insurance claims after traffic accidents.”

It might very well be the CASE – this is just a smart way of saying “there’s a possibility that”, or “it could be”. So, why not just stick to “it could be”? Well, it might very well be the CASE that by using such and similar smart English phrases you would sound a bit more native-like thus making a better impression of yourself as an English speaker!

In this particular CASE – if you’re talking about a specific case of any kind, this is a great phrase to use when starting the description: “In this particular CASE, the last employee leaving the building forgot to set the alarm, and that’s why the break-in went unnoticed till the next morning.”

English collocations (it’s just a fancy word for “word combinations”, read more about them here) are more specific than general phrases we looked at in the previous section. These are used in situations when talking about something more specific – the worst CASE scenario, for example, or calling someone a nut CASE.

Basket CASE – this English slang describes a person who’s totally useless and serves no purpose to himself or others. As you can imagine, it’s not really a nice thing to say to someone to their face! “Listen, I heard since John got a divorce, he’s become a complete basket CASE – he doesn’t go outside, spends most of his time in bed drinking beer and doesn’t talk to anyone!”

Nut CASE – do you know someone who’s completely mad and doesn’t behave like all normal people? Well, there’s a good chance that person is a complete nut CASE! Typically it’s someone who’s always getting into trouble and doesn’t care about the consequences of his actions.

CASE study – you would come across this particular collocation when reading medical literature or some other kind of research where they’ve done a more thorough inspection of a specific animal, individual or a group of individuals matching certain characteristics over a certain period of time. “This particular CASE study is looking at a 40 year old Caucasian male having been suffering from asthma since his teenage years…” – you get the drift, right?

A CASE of mistaken identity – sometimes we come across this expression when reading or listening to crime news. It’s used to describe when the wrong person has been assaulted or even murdered, basically it’s when the criminal has mistakenly targeted the wrong person. “And when can I use this expression” – you may ask? Well, when you’re retelling that story to someone, of course! “Did you hear about the murder in our town? They say it’s a CASE of mistaken identity!”

Now, I tried to be thorough, but there’s always the chance that I might have forgotten a couple of important expressions containing the word CASE.

If that’s the CASE, will you help me by posting them in the comments section below?