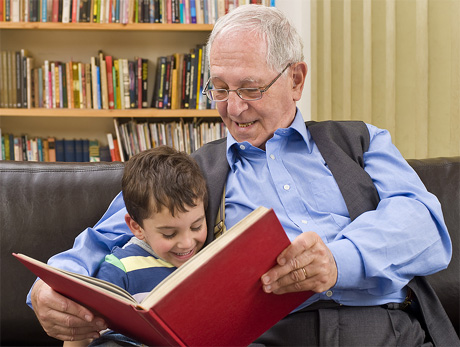 Engaging into reading and listening in order to improve English is a great way to improve your ability to understand English spoken around you. You’ll also become a much better reader over time, and it’ll definitely broaden your passive English vocabulary.

There’s a very efficient way to compliment your English reading and listening with some speaking, and that’s what today’s blog post is about. Retelling the story that you just heard or read is the key to improving your active vocabulary and spoken English, so keep reading this article to find out more about how you can make the most out of your passive language input!

Recycle What You Heard or Read

Do you pick up the morning newspaper on your way to work and go through the most interesting news stories while on the bus?

Do you always have a book in your bag ready to be taken out when you’ve finished your sandwich on your lunch break?

Do you always pay attention to hourly news bulletins on the radio?

Good! Then you definitely have to RECYCLE all that content so that it SINKS in. You have to become as good at speaking as you are at listening and reading, and there’s no better way to achieve English fluency than speaking about things you find interesting.

That news article that you read in the morning newspaper, that news story you heard on the radio, that chapter in a book that made you stop for a moment and change your perspective on something you wouldn’t usually think about – they’re all things YOUR FIND INTERESTING, right?

There are huge benefits to retelling stories. Research has shown that children who are repeatedly read the same bedtime story absorb new vocabulary words much faster than their peers who are read a new story every time. So why not act like a parent for yourself? Instead of reading or listening to news story or an interesting article just once, retell it so that at least part of those phrases and words originally used would be added to your active vocabulary.

If your goal is English fluency instead of just being able to understand what’s written or being said, you have to make ACTIVE effort! Only by actively passing the information on, you’ll recycle the bits of English information and increase your ability to produce automatic and spontaneous English speech later on!

From Now On Gossiping Is GOOD!

Your ability to retell passive English content needn’t be limited to news articles and celebrity interviews on the radio. You can retell ANY type of information that you find interesting and that others would find of good value as well.

Did you attend company’s meeting but some of your co-workers missed out on it? Make it your goal to be the first to inform them about what was discussed in the meeting!

Did you read between the lines what was being said in the meeting? Use it as an opportunity to improve your spoken English and pick up a conversation at the table during a lunch break by saying “Hey Jack, by the way, I attended the meeting yesterday and I don’t think they’re telling us the whole story!” Then retell what your managers or supervisors said during the meeting.

Use some of the phrases and expressions they used so that they become part of your active vocabulary. Let’s say for example, you heard that “we don’t think there’s any reason to believe our division positions are going to be outsourced in the near future.” Two useful English collocations from that sentence are “any reason to believe” and “in the near future”. Well, the second one sounds more like an idiom to me, but then it’s not so important because technically any idiom is also a collocation.

Anyway, you have to memorize as many such phrases as possible because they make up a big part of natural English speech. You can even put them down on a piece of paper or in a small pocket dictionary for later repetition, and there’s no better way to cement that knowledge into your active vocabulary than by speaking it all out!

So use such commonly used phrases and fill in the missing bits using your own words to create a nice, short, and to the point version of the original story. This way you’ll practice your spoken English, add more words, collocations, phrases and idioms to your active vocabulary and become a more fluent English speaker much faster than if you simply immersed yourself in passive English language input!

You don’t have to reveal others’ secrets and make enemies among your workmates and fellow college students. A healthy dose of gossiping, however, will help you develop your ability to communicate with others and the best way to do it is by retelling things you’ve seen, heard and read about!

No Two Stories Are The Same…

Have you ever listened to someone speak and thought to yourself – “I wouldn’t be able to say it using the same advanced language… My English is much poorer!”

Well, there is of course, minimum active vocabulary you need to know to be able to express yourself properly. But also bear in mind that you definitely know more than you think and your English is most likely sufficient to say the same thing using only your own words. On occasions when you think that you wouldn’t be as successful speaking about the same topic or giving account of the same event, get rid of that defeatist attitude! Instead start seeing such situations as opportunities to learn and improve your spoken English!

Take note of phrases that the original speaker or writer uses. When retelling the story, try to use at least one or two of them. If you can’t – don’t fret over it and don’t stop in a middle of a sentence just because you couldn’t put it into the exact words!

Use your own words instead and you’ll be perfectly fine. Just make sure you MAKE EFFORT to memorize word combinations used by the original author of the news story or anything else that you happen to be listening or reading. It could be anything – even two English speaking persons having a conversation on the train sitting next two you are perfect sources of English content for you to mimic!

And now I’ll give you practical example of how this happens.

Let’s say you’re sitting at your desk entering new sales orders onto the system when you hear the following news story on the radio: “Fighting raged across central Libya today as the government and opposition forces issued contradictory claims about the fate of key cities. State television said cities taken by rebels had fallen across the country, including Zawiya to the west of Tripoli, the major rebel-held town of Misurata, and the oil refinery at Ras Lanuf. But later a senior government official said that of these “victories” only the seizure of Ras Lanuf and Zawiya could be confirmed.” END OF NEWS STORY

“Retelling this account of latest developments in Libya? It’s not possible! I understand everything but I’d never be able to repeat the whole story the same way as the news broadcaster just did! I’m not a native English speaker, I’m a loser and I’d better limit my English conversations to short, work related conversations with my superiors and colleagues!”

Stop it. Seriously. Put this defeatist attitude aside and better start thinking the following way.

First of all, no two accounts of the same story are identical. That’s a fact – and you don’t have to perceive ANYTHING you hear or read in English as a constant reminder of your imagined inferiority as a foreign English speaker.

What such stories have in common, however, are the KEY phrases! In the news story above such phrases are “issued contradictory claims”, “rebel cities had fallen across the country” and “seizure of … could be confirmed.”

You see – all of a sudden your task becomes ten times easier.

Instead of focusing how impossible it is to repeat the whole story (and it would be impossible indeed for anyone – native or foreign English speaker!), just use your own words and if you can – put in a few of those key phrases. And as I said previously – even if you can’t use any of them for the first time, don’t worry, it’s fine. Just MAKE EFFORT ❗

In the first attempt of retelling the story you’ll probably use only your own words. But don’t stop there. Write down some of the key phrases as they’re CRUCIAL in maintaining natural English speech and you’ll hear them used in other contexts, too. Repeat and memorize them – and next time you’ll hear about two parties giving different accounts of the same event you’ll be able to recall the phrase “issued contradictory claims” from your ACTIVE vocabulary.

That’s how you become a fluent English speaker over time, my friend! By the way – did you know that my English Harmony System has a similar approach of re-building your English and establishing natural spoken English patterns in your mind?