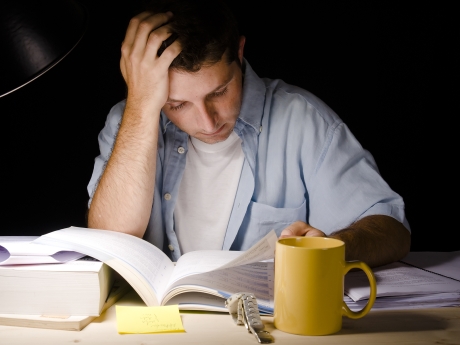 Back in the day when I was still naïve and thought that learning plenty of English grammar rules would avail of increased fluency, I used to dedicate a significant amount of time to re-reading all those grammar rules and memorizing them off by heart.

I mean – I was actually MEMORIZING the grammar rules like a POEM!

When to use the indefinite article “a”:

I won’t list the rest of the stipulations on when the indefinite article is used because this is just an example of what I used to memorize so that you get the drift of what I’m saying here.

Basically I would memorize LONG LISTS of stipulations and example sentences describing specific aspects of English grammar and I was hoping that when I know them all, I’d become a fluent English speaker.

I was even hoping that this exercise would help me get a promotion in the job I had at the time!

I used to work in a warehouse at the time, and after some time I figured – “Why not try and ask for a better position in the company?”

Our manager was a sound guy, and I thought that if I presented myself in the best way possible, I would stand a chance of getting an office job which would be a nice advancement in my career.

So I started doing things that would give me the edge and leave a good impression on the manager should he give me the opportunity to attend an interview and showcase my skillset:

Now that I look at the last entry on this list, it immediately strikes me as odd, I mean – what’s got MEMORIZED Grammar rules got to do with getting a promotion?

Well, I guess my thought process was going along the following lines:

At first glance it might even seem logical, but just look at the connection between the first two statements – memorized grammar rules result into increased ability to speak fluently.

At the time I was still following the traditional English study approach so I blindly believed that only hard grammar studies will help me succeed with my English betterment – while in reality what I was improving was the GRAMMAR KNOWLEDGE – not ability to speak in English fluently!

Would my manager ask me to recite grammar rules during the interview?

In hindsight, I can clearly see how I made the wrong decision to learn grammar rules instead of doing plenty of spoken English practice preparing for the job interview.

I thought that if I knew every single English grammar rule, I would finally be able to speak in English with a native-like level, and it KIND OF makes sense. I mean – children go to school and learn English grammar for a good reason, right?

Little did I know back then that the traditional English studies don’t make people into good English speakers for the very same reason – total focus on GRAMMAR instead of learning correct English sentences and phrases used in various situations.

Back then I hadn’t realized that it’s actually the grammar studies that prevented me from speaking fluently in the first place because it inevitably makes me analyze my speech from the grammar standpoint thus preventing spontaneous speech!

If I were to learn a bunch of phrases used during the recruitment process such as “I want to further my career in logistics”, I would quite naturally LEARN ALL THE GRAMMAR WITH THEM ❗

Just think about it.

Instead of learning ALL the stipulations about when the articles “a” and “the” are used and when you don’t have to use any of them, I simply learn a phrase where the word “logistics” is used. I don’t even need to know that there is a rule stipulating that with general nouns describing abstract concepts and notions articles don’t have to be used.

I simply repeat and learn the phrase “I want to further my career in logistics” and I can say it perfectly without knowing any grammar rules whatsoever!

There were quite a few other Latvian guys working in the same warehouse for the simple reason that we all came to Ireland together – and we also shared the same accommodation and hung out together.

There was this one guy whose English was very, very good – I mean, he was speaking absolutely fluently. Oddly enough, his grammar knowledge wasn’t anywhere near as good as mine, and I still remember the time when we were going on holidays together – we were sitting at the airport and talking about stuff.

I started telling him about my future plans with regard to career, and then I mentioned my English grammar rules memorization routine.

I actually started reciting various English grammar rules stipulating usage of various prepositions and what not, and I have to tell you that he was truly impressed!

In the end he conceded that I would definitely succeed in my career because of my superior knowledge, and it reinforced the notion to an even greater degree in my mind – I MUST KEEP LEARNING ENGLISH GRAMMAR RULES IF I WANT TO SUCCEED!

The Answer Was Right In Front Of Me – But I Just Didn’t See It!

The guy who I was telling you about used to talk a lot.

He would talk with his Irish work colleagues a lot, and I would actually talk with him in English sometimes as well (not many Latvians would feel comfortable doing that kind of stuff!)

Now that I’ve realized the importance of spoken English practice, the reality simply stares me in the face:

The guy was SPEAKING a lot -> his SPOKEN English was great.

I was memorizing GRAMMAR rules a lot -> my grammar KNOWLEDGE was great.

The two skill-sets are totally different and lack of one doesn’t necessarily result into lack of the other – my friend didn’t know grammar rules yet he could speak fluently. But I still didn’t put two and two together and kept to my old ways while the answer was right there in front of me:

Now, Do You Find Yourself in the Same Situation, My Friend?

Are you learning English grammar without experiencing any significant increase in your ability to speak?

Then check out the English Harmony System which is 100% based on spoken English practicing – and join thousands of other foreign English speakers who’ve improved their English fluency by using this top-notch product!

I developed this fluency improving program myself after all the long years spent on trying to improve my English the traditional way, so you can rest assured that it ACTUALLY WORKS.

See you on the other side,