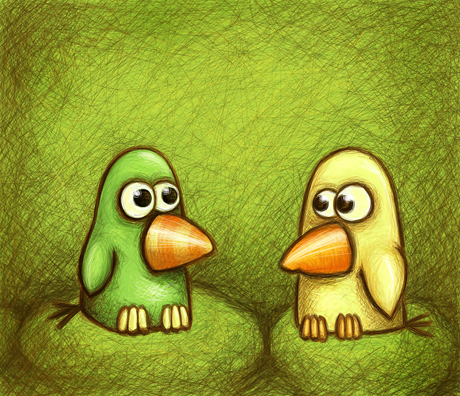 Unless you live in a full English immersion 24/7/365 (which is quite an unrealistic scenario unless you’re married into an English speaking family and lost all connections with your home country…), you’re using both – English and your native language on a continuous basis. Usage of English, however, is most likely limited to certain times of the day and certain locations. Traditionally, you’d speak in your native language with your family members and English at work and friends.

Sometimes, however, you might be required to speak English on occasions that would normally be associated with using your native language and it may pose some difficulties – and that’s what I’m going to look at in today’s blog post.

Are foreign English speakers capable of switching over to English easily or it poses some challenges? Should you aim for long periods of time when you speak and think only in English to facilitate English fluency? And if it’s beneficial to your spoken English improvement – is it a good idea trying to talk your friend into speaking English with you?

All these and more questions are going to be discussed in today’s blog post so keep reading it if you’ve ever been wondering why is it that the longer you speak in English, the easier it becomes and why it’s more difficult to communicate in English in unfamiliar settings!

As you may already know, I’m a Latvian having moved to Ireland nearly ten years ago, and quite naturally I speak Latvian in my family and with other Latvians living locally. Living in an English speaking country requires you to speak English in all other aspects of life – like when dealing with institutions, at work and around the town, so I’d say I spend about 50% of my time communicating in English, if not more. Especially considering I spend a considerable amount of time speaking English with myself to keep my fluency as sharp as I can!

Anyway, over the years I’ve noticed that it’s not that easy for me to suddenly switch over from Latvian to English – especially in situations when I’d normally use Latvian. Let’s say for instance, I’m sitting in a living room having a chat with my wife and the doorbell rings. I open the door, and there’s an agent offering me to switch over to their energy supplier. I have to admit that I’m more likely to make a mistake of some sort or hesitate a little bit when answering that person in English just because I used Latvian just a couple of seconds ago. Well, it won’t definitely happen, but the fact remains that my English fluency levels are higher when I use the English language in circumstances and surroundings normally associated with it – like in my home studio recording video lessons for my English Harmony YouTube channel 😉

I wouldn’t have the opposite problem, however, with switching from English to Latvian. Our native language is so deeply ingrained into us that no change of location, surroundings and people would change my ability to speak and verbalize my thoughts using my mother’s tongue.

Using the English language is slightly different, though, because it would be normally associated with more or less the same situations and people therefore you’d be more comfortable using it under those circumstances. As I’ve often said on my blog – you are what you do, and so is your English because it reflects your interests, hobbies, professional and personal life. You simply have to admit that you use the English language more for certain things in your life and less for others ❗

Don’t get me wrong, however; I’m not saying that you shouldn’t aim to develop your English among all possible life aspects. That’s EXACTLY what I’m doing on a daily basis, and I believe it is possible to feel 100% confident when switching between languages in virtually every possible situation.

I remember when I was away for holidays in my home country and I hadn’t used English for a good while when my phone suddenly rang and I had to speak with my daughters’ teacher. I was actually surprised at how easily and fluently I was able to speak – it just goes to show that taking a break from the English language for a short period of time may facilitate your fluency for some strange reason.

Anyway, going back to the topic of switching between your native language and English – it still remains a fact that the average foreign English speaker is going to find it a bit harder to switch over to English when in an uncharacteristic setting.

I remember my cousin telling me a story of how some Latvian chap had brought his Polish girlfriend along to a party so they had to speak English with her. My cousin just couldn’t speak normal English for some reason, although she spends much of her time speaking with English speakers. You see – it was something unusual, something out of ordinary, so it was difficult for her to use Latvian with others and speak English with the Polish girl.

Speaking English With Your Friends –
How Realistic Is It?

I used to work in a warehouse where I’d spend 90% of the time on my own so I didn’t have any other opportunities to speak in English but with myself. Once I and my best buddy decided to speak English with each other so that we would improve our fluency.

We failed miserably. We just couldn’t do it because it felt unnatural and we were slightly embarrassed from each other. You see – it was something out of ordinary, and we just couldn’t handle it. So my spoken English practice remained limited to speaking with myself and the occasional word exchange with my supervisor or a short chat with a couple of Irish lads who worked with us.

Looking back to it now, I can definitely say we didn’t try hard enough. Why, I know plenty of Latvians who have to speak English with each other at work places like grocery shops due to practical considerations – and I and my mate would have definitely gotten used to it if we just stuck with it.

Also plenty of foreigners who work in offices and other types of professional English environment are required to speak English only – so it’s nothing unique as far as you get used to it. But you see – here’s the familiarity factor again – IF YOU’RE USED TO IT.

I can actually remember a Latvian chap who used to come over to my place for a cup of tea every now and then and we would often speak English with each other. He was going out with an Irish girl at the time so he essentially had a 100% English immersion. Needless to say, he had developed his English fluency to a near-native level and didn’t have any problems speaking in English with anybody. I took advantage of this fact and as I said – we’d speak in English with each others on many occasions despite our native language being Latvian.

Obviously I just had to GET USED TO speaking English with that particular person and all of a sudden it didn’t seem weird at all.

… Getting Used To Speaking English
In Unfamiliar Settings

I don’t think I have to convince you of human ability to adapt to any circumstances. From freezing arctic temperatures to searing desert heat – people are living virtually everywhere while the average modern human would find it impossible to live in such extreme conditions.

By the same token, I believe that the average foreign English speaker can get used to using English in every life situation with enough practice and determination ❗

As I’ve already mentioned a few times throughout this blog post, self-practice is a very powerful tool on top of conversing with other English speakers. Given enough time you can eradicate the strong emotional link between certain locations, times of the day and using your native language if you make it your habit to think in English and comment on your actions. That way you’ll be constantly forced to widen your active vocabulary and find new ways of conveying your thoughts and feelings. Eventually you will achieve a point in your life when you can speak fluent English regardless of what situation you’re in!

The biggest problem of all, in my opinion, is becoming very conscious of your own speech when your native speaking folks are around, for instance. Let’s say, you’re having a family meal and suddenly your phone rings and you have to speak with your boss in everyone’s presence. You may perform very well, but then there’s a chance that everyone’s awareness of your English speech will put so much pressure on you that you may find it more difficult to speak.

I’d say the key is having long uninterrupted sessions of spoken English practice throughout the day.

Personally I notice my English fluency go up big time when I’ve spent the first couple of hours at work every morning – it’s like easing my mind into the English speaking environment and then reaching the peak of my performance. I’m not saying I find it particularly hard to speak in the very morning; however, the complete and absolute fluency kicks in only after a while.

You may find that it’s true in your circumstances as well, so I would suggest you to force yourself to have long sessions of inner chat or slight whisper in English with yourself when you’re in surrounding that would normally be associated with using your native language – at home, going to and coming back from work and so on. I’ve been doing it with great success for a long time and believe me – it works! 😉