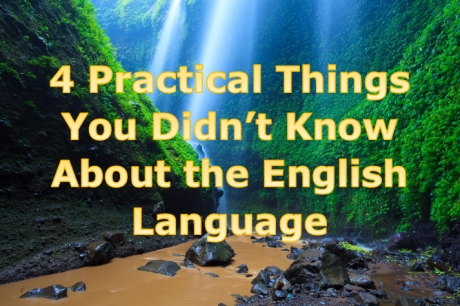 Even if you’ve been learning and using the English language for years, I can assure you that there are some quite practical things about this language that you’re not really aware of ❗

“Ah well, this is just another article about English word origins, historic facts or funny things about the English language…” – you may have been thinking when reading the headline.

If so, then let me tell you – you’re in for a very pleasant surprise!

In this article I’m actually going to reveal a good few things about the English language that will HELP you in your fluency improvement routine by making it easier to learn new vocabulary, pronunciation and a whole lot more.

Then what are we waiting for – let’s get started! 😉

‘R’ Sound is Actually a Vowel – It’s NOT a Consonant!

Any English teacher will tell you that the letter ‘R’ is found amongst the consonants, and most English students wouldn’t even dare to think differently.

The heck – even I thought the same up until a few years ago when I read somewhere that if you start perceiving the English ‘R’ as a vowel sound rather than a consonant, it’s going to be much easier for you to get the pronunciation right.

So, the thing is that if you perceive the ‘R’ sound (watch a video about it HERE) as a vowel and you stop pressing your tongue against the front part of your palate like you would when producing consonants such as ‘D’ or ‘T’ (in the latter the tongue is placed in a more forward position, of course, but I hope you get the general idea!), all of sudden it becomes much easier to pronounce the ‘R’ sound just like native English speakers would!

There Are Some English Tenses Even Native Speakers Don’t Use…

Many English learners are obsessed with trying to learn and use all English tenses, and it’s perceived as the Holy Grail of English studies by many.

In reality though, it’s much more productive if you focus on the few most commonly used grammar tenses (especially in the beginning!) and forget about the rest of them because they’re rarely even used by native English speakers in day-to-day communication!

There are some tenses, however, that I personally haven’t heard anyone use over the last 6 years since I’m working among native English speakers – namely, Future Perfect (I will have done it) and Future Perfect Progressive (I will have been doing it).

The aforementioned grammar constructs are just cutting into my ears as I try to pronounce them!

Any native English speaker speaks much simpler – they’ll say “When you arrive, your friends are going to be gone” instead of “Your friends will have left when you arrive”.

So, if you think that you’re going to sound really professional by using Future Perfect and Future Perfect Progressive – think twice! You’ll definitely sound as if you’re trying really hard to get it right, but it won’t come across as natural English speech, that much I can tell you!

If You Thought WILL + Infinitive is the One And Only English Future Tense – Think Twice!

Here’s another useful English grammar-related fact that I’m sure will surprise you – the typical Simple Future Tense formed using WILL followed with the main verb in infinitive (I will do it) isn’t actually the main English grammar form used when referring to future events.

Well, here’s what Aaron from PhraseMix.com commented on my blog post about the English Future tenses:

I see this all the time. Most English learners over-use “will” like crazy. I’m not sure where this comes from — is it something that people have incorrectly learned through school-based language instruction? Or is it that “will” is a single word and therefore easier to identify and use?

I’ve tried to explain the difference between “will”, “going to”, and the present progressive tense, but the world’s English learners don’t seem to have gotten the message yet 🙂

I want to laugh every time I hear about this media-perpetuated myth!

We’ve been exposed to a lot of information on how certain English words mean completely different things in Britain and America – “pants” describes a pair of trousers in US whereas in UK it describes underwear, for example.

There’s also plenty of information out there on how certain things are described differently across the Atlantic – American “biscuit” is “cookie” in Britain, and British “holiday” is “vacation” in America.

Maybe 20 years ago all these differences still mattered, but nowadays the American phraseology and slang has become so popular in Britain and also in other places on the planet that you’ll hardly find yourself in an awkward situation having used some American phrase or word when speaking with a British person.

One day, for example, I saw a “highway maintenance” truck while driving to work in Ireland (which derives its vocabulary mainly from Britain) – it just goes to show that American vocabulary (in Britain and Ireland we have “motorways”) has made its way into the formal language.

Another example. Recently there was a new KFC restaurant built in my town, and guess what it says at the entrance to drive-through section? “Drive-thru” – it’s a typical American spelling which I quite like, by the way – there’s a tendency in the US to simplify rather complicated words.

So, the bottom line is – while your middle-aged English teacher might still try to convince you that there are a lot of significant differences in American and British English, the reality is much different! You don’t have to waste your time and energy trying to learn specific words geared towards one or the other country – just use what you hear in movies and media, and you’ll be understood worldwide!