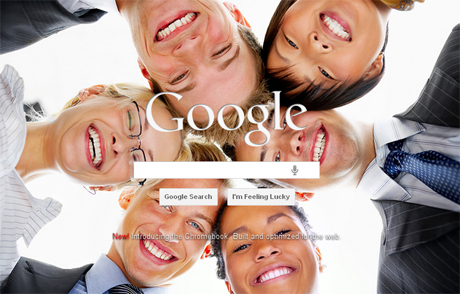 Yes, it is! But in this blog post I’m not going to discuss the cool Google speech recognition functionality or some similar tool (I’m probably going to look at it in one of my future blog posts though). By saying that you can use Online Search Engines to improve your spoken English I’m referring to Google, Yahoo and other Online Search Engine search suggestions – simple as that ❗

Performing search on certain words and search terms allows you to find out plenty of useful information about naturally occurring English word combinations, and if you’ve been reading my blog for a while you’ll know that I’m always emphasizing the importance of memorizing words that go together in natural spoken English – collocations, idioms, phrasal verbs.

Simply because it allows you to speak fluently; as you say the first word, the next ones are triggered automatically because your brain and mouth have been trained to pronounce certain words together ❗

So if you’re interested in intricacies of Google, Yahoo or Bing search suggestions that allow you to learn patterns of real life English – keep reading this article and you’ll probably be in for a nice surprise on how instrumental Search Engines can be to a foreign English speaker!

The fact of the matter is that Google IS the biggest Search Engine (SE) on planet and it holds the biggest market share – you can use this website to check the biggest SE market shares and see how they’ve changed over the years. One thing is pretty obvious when you look at the data – Google is by far the biggest, followed by Yahoo and then by Bing (owned by Microsoft).

But I want to make it clear from the outset that most of the techniques described in this blog post apply on all aforementioned Search Engines. So if you prefer Yahoo or Bing for one reason or another – you can still acquire all necessary information about English collocations on other main Search Engines. After all, once the competition between them is so fierce, every one of them makes sure to implement similar features in their search algorithms.

The next question that might have crossed your mind is – “What’s Google got to do with spoken English improvement? Haven’t you, Robby, emphasized it on many occasions in your blog that written and spoken English are different? Surely Google search algorithm can only analyze articles, blog posts and other pieces of written English?”

Technically spoken English and written English are different beasts altogether when it comes to developing your spoken English fluency. You can’t expect become a fluent English speaker if you focus mostly on writing throughout your English studies. You’ll find it very difficult to form a fluent and coherent speech if you speak as you’d write. Creating English sentences in your head and then speaking them out loud will make your speech slow, hesitant and unnatural, and that’s what I’ve discussed on many of my blog posts and videos.

The reversed statement, however, isn’t true. Not only you CAN write as you’d speak, but it’s ESSENTIAL if you want to become a successful English writer and I have also written a number of guest blog posts about this matter! In other words – it’s not so much about the content of spoken and written English, it’s all about implementation of that content and how you develop your abilities to deliver it through both verbal and written communication channels.

I’ve never said, contrary to some, that spoken and written English are very different in terms of the language used. Well, it’s true that you’d use less formal language and more phrasal verbs when speaking, especially in casual situations.

Typical English collocations, however – especially idiomatic expressions – remain the same weather you write or speak so you needn’t worry about possible mismatch between what Google brings up in search results and what you’ll use in your daily conversations.

Also, you have to take into account that big part of all written material indexed by Google has been written in a very casual style, it’s the same way tabloid language is very similar to every day spoken English. And on top of that, don’t forget that Google and other Search Engines determine what suggestions to display not only based on how frequently they appear on their index but also going by what Internet surfers are typing into the search bar.

So you can be pretty sure that what Google, Yahoo and Bing are suggesting isn’t detached from everyday, normal English.

But now – let’s get down to business!

I’m sure you’ve noticed that whenever you type a search term into the Google search bar, it shows you a list of suggestions beginning with the word you’re typing in. For instance, if you’re typing in a word ‘improve’, Google suggests you a number of search terms people would enter following the word ‘improve’ – in this case it’s ‘memory’, ‘posture’, ‘concentration’, ‘speed’ and ‘your life’.

These particular suggestions don’t indicate any English collocations simply because the word ‘improve’ can be used with a vast array of different words; however, the more specific you get, the more Google suggestions will help you to guess what words naturally go together (collocate). If you type in a word ‘contrary’ in the search bar, the following suggestions come up: 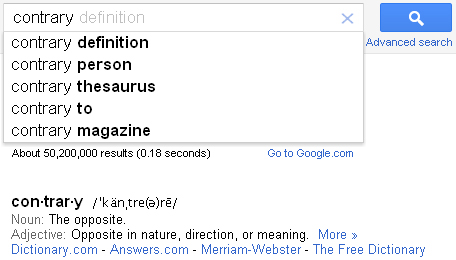 The first one – ‘contrary definition’ is obviously a search term people use to find out what the word ‘contrary’ means. In this case, however, Google makes it so handy for you that you don’t even have to perform the search; meaning of the word ‘contrary’ is shown below the search bar as you can see in the screenshot. You also have direct links to four largest dictionary and reference websites – Dictionary.com, Answers.com, Merriam-Webster and The Free Dictionary – and I warmly suggest you do look up new words in an online (or hardcover) dictionary such as these as opposed to a dictionary giving translation in your native language.

Anyway, the second and the fourth search suggestions – ‘contrary person’ and ‘contrary to’ are the natural English collocations I was talking about and that’s how the word ‘contrary’ is normally used in the English language – followed by a preposition ‘to’ or when speaking about a person who’s notorious for disagreeing with others, quite often just for the sake of disagreeing. 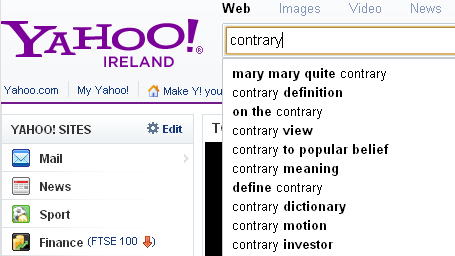 Well… I’m not quite sure why Google doesn’t suggest phrases including your search term beginning with other words; I’d say there must be a reason for it, and anyway – the idiom ‘on the contrary’ shows up as the fourth instant search result (see it at the bottom of the list):

So I think it’s fair to say that you can get an overall impression on natural usage of the English word ‘contrary’ just by typing it into a Search English search bar and looking at the suggestions that are instantly displayed.

Google search suggestions are also great when you’re not quite sure about the exact way of saying a certain thing in English. For instance, English grammar books will tell you that when speaking of places like institutions and work places where we spend time on a regular basis, we should use the preposition ‘at’ instead of ‘in’. So when you’re saying that you got a bad grade you should follow it up by ‘at college’ instead of ‘in college’, right? Well… If you’re in doubt – use Google!

Just start typing in “get a bad grade” and see what suggestions Google comes up with. As you can see from screenshot to the left, “get a bad grade in college” is actually a grammar construct used more often, and it’s a sure sign you should say ‘in college’ instead of ‘at college’ – at least in this particular context.

I have to admit that there are downsides to using Search Engine suggestions as a hint on how certain words are used in the English language. Just look at the screenshot below where I’ve just typed the word ‘pique’ into the Yahoo search bar: 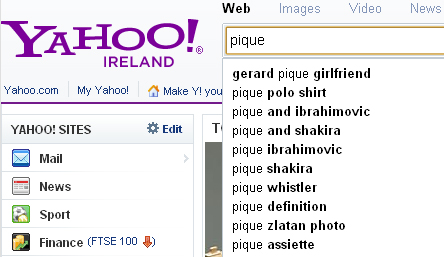 Would a beginner English student get an overall picture on how a word ‘pique’ is normally used; are there any idioms or collocations among the suggestions? Nope. And it’s all because ‘pique’ (which is a word of French origin) also happens to be a weaving style, and Pique is a Spanish and French surname – hence the suggestions ‘Pique and Shakira’ and ‘Gerard Pique’.

So here’s what you have to understand about typing in single words as search terms in Online Search Engines and inferring their natural implementation in spoken and written English from the suggestions.

Search Engines will show you a mix of both English collocations and idioms as well as other word combinations that aren’t necessarily relevant for someone trying to find out how that particular word is normally used in the English language – such as brand names and specific industry terms.

Yes, Google does hint on a collocation ‘to pick someone’s interest’ by displaying a search suggestion ‘pique interest’ as third in the list:

Yet, it’s not enough to make it obvious to someone who’s heard the word ‘pique’ for the first time and now is trying to figure out how it’s used!

Sometimes you can get a fair impression of how a particular word is commonly used in spoken and written English just by typing it into Google, Yahoo or Bing search bar, especially if it’s a more specific word:

All above search suggestions are relevant if you want to know how the word ‘structural’ is used, and there are no brand names or surnames among them.

If you try to look up simpler, more common words, the suggestions won’t be a big help to you.

If you type ‘brim’ into the Google search bar, all it suggests is ‘brim tractor’ which is a brand name as well as ‘brim healthcare’ and ‘brim brothers’; the other two suggestions are also specific word combinations. ‘Brimful of asha’ is the name of a song, and ‘brimfield’ is antique and collectibles website.

As you can understand, these suggestions are produced based on how often those particular search terms are entered, and in this case it’s got nothing to do with how the word ‘brim’ is used in the English language.

And if you think about it, it’s quite understandable because Google and other Search Engines aren’t built to cater for foreign English speakers exclusively; they have to provide the most relevant search term suggestions for the general public.

“What was the point of this blog post, Robby?” – you may ask. “Why did you start off by saying that Google, Yahoo and other Search Engines can be great in assisting foreign English speakers with pointing at natural English speech patterns but then concluded that on many occasions those search suggestions won’t provide a full picture?”

Well, I did it just to pique your interest, my friend!

This blog post was just a teaser, and in the next one I’ll tell you EXACTLY WHEN Google and other Search Engines are INVALUABLE in pointing you in the right direction if you want to find out how this or that particular idiom or phrase sounds in English! 😉