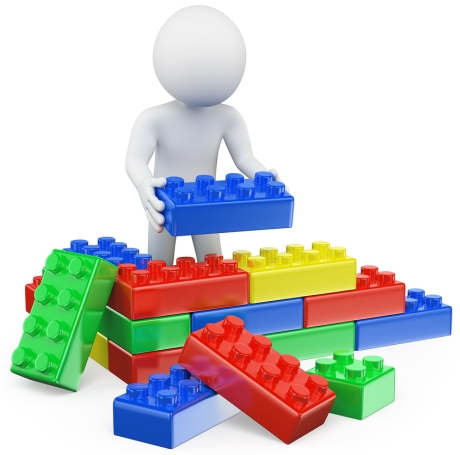 Your method, learning English through idioms, phrases, proverbs, etc. is so much fun! It’s like playing with Lego bricks! Really! You see, you took most of the grammar (which for most is a party-breaker) out and made it so much less intimidating.

You completely changed my view on English. Now I don’t see sentences as complex structures (teeming with grammar lawfulness) but rather as different ready-to-go pieces (that is idioms, phrasal verbs, etc.) put together. Just like Lego bricks!

That’s why I find it like playing with it. You take on brick/part which is at your disposal and then choose which one will go along (with the same method: see what you have and try to make the best combination to convey your message). Thank you for that!

I really, really liked this comment – not just because its author agrees with me on the effectiveness of contextual English learning, but also because it puts a completely different spin on the whole thing and makes you realize that English learning and improvement has to be perceived as a fun game rather than a boring chore!

When You’re Playing, You Don’t Have to Fear English Grammar!

Most non-native English speakers don’t really like formal English grammar for the simple reason that it requires specific grammar studies which are boring for the most part and also typically you’re required to learn specific grammar terms which have little to do with real-life spoken English.

If you perceive your English studies as a GAME where you can freely experiment and improvise without freaking out over some grammar mistake you may make, the whole experience becomes so much more interesting!

If you perceive English language components – phrases and word combinations (and no – individual words AREN’T the basic units of spoken English!) – as LEGO bricks, all the fear suddenly goes out the window.

You can stick a number of LEGO bricks together in a number of different ways without much thinking and there aren’t really any rules to determine what way you have to do it.

Similarly, you can play with your English and construct your speech in a playful way without thinking about grammar rules that govern the process because English phrases naturally stick together just like LEGO bricks.

When You Stick LEGO Bricks Together, You Don’t Think About What They’re Made Of!

Just think about such a scenario.

You’re taking a LEGO brick in your hands and you’re trying to figure out what kind of plastic it’s made from, what kind of coloring agent has been added to make it red, and you’re also closely analyzing it’s width and length to make sure you’ll be able to join it with another LEGO brick.

But guess what? This kind of process happens when you’re trying to analyze your English from the grammar standpoint when trying to construct English sentences from scratch in your head!

Just like taking all the fun out of your LEGO playtime, such analysis makes fluent English speech pretty much impossible, and here’s a very good example.

Let’s say for argument’s sake that you’re trying to tell someone in English that you’ve had a great weekend on your own and you could do anything you wanted without anyone telling you what to do.

If you go down the grammar path by constructing an English sentence from scratch, here’s how the whole process is most likely happening:

“I spent the weekend on my own (is it “on my own” or “in my own”?…) and didn’t do anything (or maybe I can say “I did nothing” – but is that going to be correct?…) – I slept much longer than normally (or maybe it’s “longer than normal”, I’m not sure…), ordered plenty of takeout food and watched TV the whole time!”

There are so many words to choose from when you’re constructing the speech, and so many questions to ask yourself while you’re doing so – which inevitably makes you stutter and hesitate.

If, on the other hand, you take the following LEGO bricks (ready-to-go English phrases):

and simply stick them together forming a sentence “I spent the entire weekend doing nothing – I stayed in the bed, had plenty of takeout food and was watching TV all the time” WITHOUT any analysis and thinking whatsoever, you don’t have to THINK about how you’re going to word the whole speech.

Making a Mistake When Speaking is Really No Bigger a Deal Than Failing to Attach a Lego Brick!

Quite a big impediment preventing most non-native English speakers from speaking fluently is the constant fear of making mistakes and saying this or that particular thing wrong.

And again – if you approach speaking just like playing with LEGO bricks, you can just forget about the concept of mistakes altogether!

Just think about this – when you’re trying to stick LEGO bricks together and one of them kind of slips off another, are you immediately freaking out about it? (Of course you’re not!)

Are you becoming super-conscious of your inability to stick LEGO bricks together at a 100% precision rate? (Of course you’re not!)

And tell me this – do you never try a few ways of putting them together before figuring out the best way to accomplish the construction task? (Well – no-one is as perfect as to get everything 100% right from the get-go!)

So the moment when you start thinking about this whole English improvement thing from the perspective of someone who plays with LEGO bricks, you’ll realize that speaking in English is not so dissimilar from any other physical activity – be it driving a car or playing a guitar!

Making mistakes and improvisation is an integral part of any successful physical activity – spoken English included – and you don’t have to know how the car is built, how the guitar has been put together or what the LEGO bricks are made of to be a good driver, guitar player or LEGO constructor.

So why be so hung up on English grammar and syntax?

Just play with the phrases as if there were LEGO bricks, and everything will suddenly happen to you!