It happened this morning.

This time around, I wanted to tweet an English idiom “on the off chance” which means “in the unlikely event”:

As always, I started writing a sample sentence containing the idiom “on the off chance” – just to give my Twitter followers a general idea of how this particular expression is used.

I’m sure you’re familiar with the feeling when you say something in English, but it just doesn’t seem right, aren’t you? This “gut feeling” develops along with your English fluency, and it can be explained by highly developed contextual links among English words in your inner vocabulary.

Speaking in simple terms, it means you’ve heard and used certain English phrases so many times that you intuitively know in what context they’re normally used.

In the example with creating a sentence containing the English idiom “on the off chance”, I intuitively felt that it might not normally be followed by the conjunction ‘if’; it just didn’t sound right. A few nanoseconds later another viable option crossed my mind – ‘that’. The sentence seemed to flow so much better with ‘that’ than ‘if’ – “On the off chance that…”

Obviously I can’t just chance it; what if I publish some non-sense on my Twitter account and my fellow foreigners start speaking incorrect English just because I taught them so?

Not that I’m some sort of a perfectionist when it comes to speaking in English, it’s actually far from it!

However, as far as my professional activity is concerned, I just can’t afford to be lackadaisical and publish English content that I’m not so sure about.

In situations like this, Google search suggestions is an invaluable tool. It takes just a few seconds to ascertain the truth, and here’s exactly how it’s done.

I’m taking the phrase in question, in this case – “on the off chance if”, and I’m entering it into the Google search bar, simple as that: 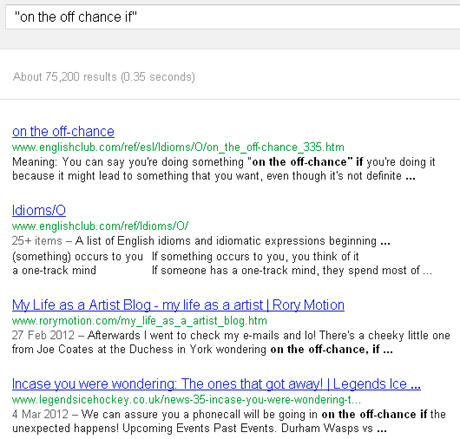 So, are you wandering what such a simple Google look-up can reveal?

I’m going to put both search results together so that you can see how they stack up:

As you can see in the image above, the phrase “on the off chance that” has about 120 time more records on Google than “on the off chance if”. It’s a pretty definite indication of the former one’s prevalence in the spoken language!

Now, I can be 99.9% sure that native English speakers use the phrase “on the off chance” followed by ‘that’ instead of ‘if’, and that’s exactly what I’m writing in my tweet’s sample sentence.

On many occasions though, both options can be used depending on the context.

That’s why we have the third point in the above list, and it says something about looking at the highlighted Google search results, doesn’t it? 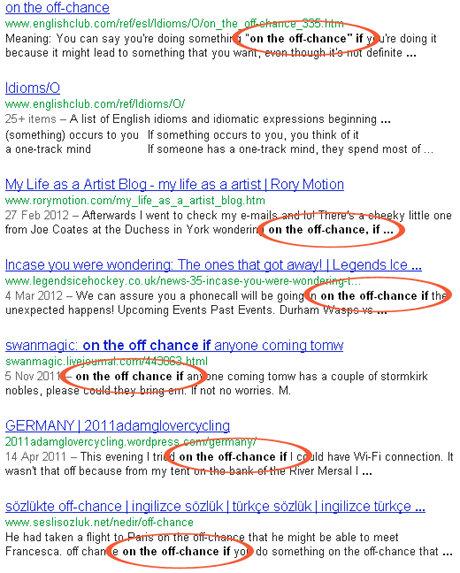 If I read how that phrase is incorporated into the surrounding context, it becomes quite clear that it’s incorrect English. Those comparatively few Google entries containing the phrase “on the off chance if” have most likely been created when writing very quickly, without much consideration.

Also, at least two entries on the first page have a full stop between the words: “on the off chance. If”.

It can only mean one thing – once Google couldn’t return sensible, viable sentences containing the phrase in question at least on the first search results page, the phrase “on the off chance if” isn’t something that’s used in natural, spoken English.

On the other hand, ff you look at the highlighted results on the first page under the phrase “on the off chance that”, it’s obvious that this phrase is being used naturally: 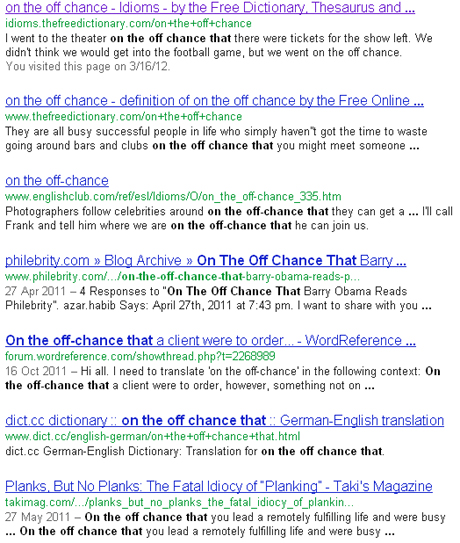 So, this is how you can use Google to figure out how exactly certain English idioms and phrases are used in the English language!

Did you find this article useful?