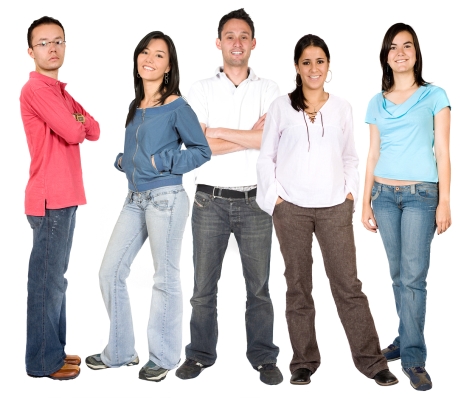 Some time ago I published an article called “5 Reasons Why It’s Easier To Speak With Native English Speakers Than Other Foreigners”.

As I already pointed out in the first article – on most occasions it’s all a matter of perspective. All other things being equal – such as your level of English fluency, language comprehension etc. – you may feel more comfortable speaking with another foreigner simply because you’re not ashamed of saying something wrong (which inevitably happens during any conversation).

Or it also could be that you spend most of your time working in an international team, and speaking with native English speakers is an exception rather than a rule.

“It is mostly our OWN mental inhibitions that make us favor conversations with natives or foreigners!”

And of course – it varies from person to person a great deal!

While you mightn’t have any problems chatting with your native English speaking work colleague, your supervisor might be giving you the creeps and you always stutter and find it difficult to explain yourself in his or her presence.

Anyway, here are the 3 situations when you may find it easier to speak with your fellow foreign English speaker instead of a native speaker.

Situation #1: You Have Foreign English Speaking Friends or Work Colleagues

If you have a close friend or a work colleague – or indeed both in one person! – who’s of a foreign origin yet with a different national background, you may find it much easier to talk to him than any other native English speaker!

When I worked in an international phone call center a few years ago, I had work colleagues from France, Spain, Italy, Poland, China, Argentina, Peru, Holland… You name it! The only two Irish people in the whole team where my team leader and manager, so no wonder I was used to speaking in English with other foreigners.

Well, there were many a day (or should I say – ‘night’ – because I worked in a night shift?) spent discussing every imaginable subject with my team leader, and there’s no doubt it helped me develop my English fluency big time.

Yet when my team leader left our team, a Polish fella took his place and I started to spend more time with another Polish colleague of mine. On many occasions it didn’t help my English fluency issues which I still had back then, yet I was more comfortable around other foreigners because I was spending most of my time with them!

Situation #2: You Don’t Feel Intimidated When Speaking With a Foreigner

You may be comparing your speech with native English speakers, and quite naturally draw a conclusion that yours is no match for that of a native speaking person.

A few painful experiences dealing with natives might have created an impression that most of them treat you with disrespect. Well, sometimes it will happen, but more often than not it’s totally unrelated to your national background differences. Try to say it to your subconscious mind, however… It will make decisions on its own, and so you may get the false impression that it’s safer to speak with foreigners because they won’t say things like “What?” when you’re not understood during a conversation.

And then there are occasions when differences in your social background may create a false impression that you belong to the foreigner community, natives stick with their own, and that’s the way the world operates. I was in the same position just after moving to Ireland 10 years ago, and I believed we foreigners were just a source of cheap labor for the wealthy local firms and companies.

Now I know different, and I realize that it’s all a manifestation of my own insecurities. Nonetheless, it can be one of the reasons why you might feel more comfortable speaking with other foreigners than native English speakers.

Situation #3: Your Foreign English Speaking Chat Partner’s Level of English is the Same as Yours or Better

In the article about reasons making it easier to speak with native English speakers I talked about natives understanding you from half a word. I also mentioned the fact that natives won’t pretend they understand you and you won’t have to constantly second-guess your chat partner.

In a situation when you speak with a foreigner whose English is the same or even better than yours, you can toss all those concerns aside and enjoy a normal conversation.

On top of that, if speaking with natives tends to make you a little bit self-conscious, this situation when you speak with another foreigner who understands every single word you say might just be the perfect English conversation for you.

Once again, let me remind you that it’s all a matter of perspective.

Technically there is no difference between speaking with a native English speaker or a fluent foreign English speaker, and you should be capable of enjoying normal English conversations with both.

Yet, our psychological inhibitions aren’t easily overcome, and sometimes they play a major role in the way we, foreigners, communicate with other people in English.