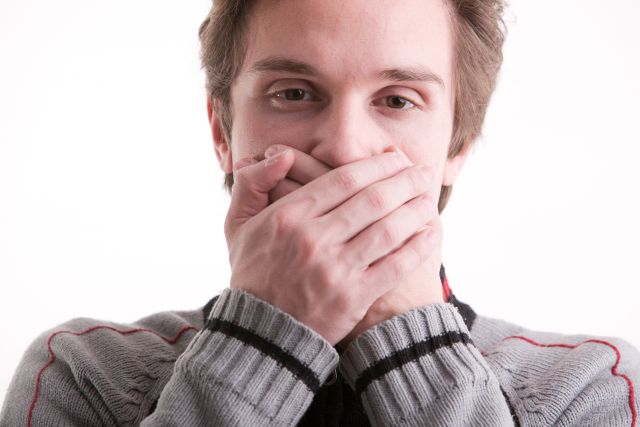 How many times you HAVEN’T SAID something in English because you’ve been ashamed?

I bet it’s too many to count, my friend foreign English speaker, and that’s the prime reason why your fluency isn’t at the level you’d like it to be.

Well, of course, it could be the case that you’re quite happy with your level of English fluency, but the chances are – if that were the case, you wouldn’t be reading this blog, am I not right?

Anyway, let’s not get side-tracked from the main subject which is all about being ashamed of your level of English and NOT speaking enough.

Two foreign English speakers move to an English speaking country, take up jobs and settle down to live in that country for a good few years.

The first foreigner takes every opportunity to open his mouth and say something in English. Every time his boss, co-workers or customers ask him something, he always tries to say something extra, something to keep the conversation going. And he also doesn’t miss a chance to start a chat with others.

Now, the second foreigner is also doing alright, however, unlike the first one, he will only say the bare minimum that people ask him. He will never start a conversation, will never say anything extra, and it’s all because he’s ashamed of making mistakes and sounding stupid.

You think the first foreigner isn’t making any mistakes? Oh boy, of course he is! We all do, it’s an integral part of being a foreign English speaker – you are bound to make lots of mistakes before achieving a decent level of fluency. Yet, the first guy just DOESN’T CARE.

For the first guy, it’s all about FUNCTIONALITY.

For as long as he’s understood and he understands others, it’s fine. Sure, he would have situations when he’d say something that others would be having a hard time understanding, but all he needs to do is – say it again, in a different way, and eventually the message is understood.

The second guy – well, he’s all about EMOTION.

What if I say something wrong? It’s going to be such a shame! What if I start a sentence and can’t finish it off? It’s going to be a total and utter disaster! I’d better stay quiet, just say what I have to say to get by and stay within my comfort zone…

So while the second guy is saying on average thirty short English sentences a day, the first foreigner manages to say at least one hundred and fifty.

Well, so what, you may say? What’s the big deal, right? The second guy is still speaking and saying something, and what if he does some English studying at home after work? Surely it would outweigh his lack of communication at work!

Let’s look at some figures again.

Let’s look at the whole year ahead, and see how much speaking both guys would do purely in terms of the number of sentences spoken out loud.

Let’s look at the guy who’s all about functionality. What’s the figure? A staggering 36,000 sentences! And bear in mind, my friends, it’s just covering the working days!

Truth is, the first guy would definitely try and seize every opportunity to speak with others in English over the weekend, while the second person would most likely stay away from using the English language while out and about due to the emotion called SHAME.

But if you think that English isn’t a numbers game – well, I hate to break it to you, but it is.

Do You Think It’s Impossible To Change Your Attitude?

You may think that the two fictional characters, the two foreign English speakers that were portrayed in this article, represent two distinct types of personality and there’s nothing that could be done about it.

You may believe that once you’re born that way, it’s impossible to change.

Yes, the second guy will probably never be as outgoing and sociable as the first guy, it’s true, but it doesn’t mean that he can’t change his attitude at least a little bit, and sometimes this LITTLE BIT can amount to A LOT.

If you’re somewhat reserved and shy by nature, chances are, this trait will always stay with you. After all, we as humans are shaped in the very early stages of our lives and it’s our childhood that determines what kind of people we’re going to be.

It doesn’t mean though, that you can’t consciously DECIDE to change your attitude in certain situations and FORCE yourself to do certain things.

If you force yourself to start that English conversation once, then again, and then again, it will eventually become easier. Yes, you will probably always have to give yourself a little push before doing so, but the wonderful thing is – the more often you do it, the easier it gets.

As much as we can’t just change our psychological make-up which is pretty much hard-wired into us, at the same time we’re also creatures of habit, which means that the more frequently we engage in a certain type of activity, the more it becomes a part of ourselves.

Also, thanks to the intellect that we possess, we have the power to make the right decision even though our emotions would say otherwise, and it’s this intellect combined with the knowledge of what really matters when it comes to spoken English improvement that is the greatest help to keep our shame in check.

So, next time when your inner voice is telling you – “I shouldn’t say anything, I’m going to sound stupid anyway…” – just force yourself into action and speak out loud.

It’s not as scary as you think it is!