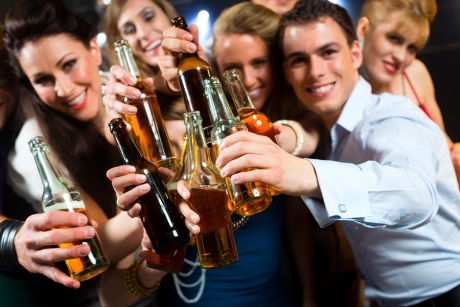 Actually I don’t think that the effects of alcohol on your ability to speak in English fluently is any more shocking than the fact that drinking affects pretty much any area of your physical performance.

Walking in a straight line.

Basically when you have a couple of drinks in you, your ability to perform physical tasks starts declining, I guess everyone will agree on that with me!

“But surely my ability to socialize with other English speaking people should improve when I’ve had a couple of drinks!” – you may say.

“In most social situations I’m on the shy side, so especially considering that I have problems with confidence when speaking in English, wouldn’t it actually make sense to be slightly intoxicated so that I’d get rid of any emotional hindrances preventing me from communicating with others in English freely?!” – probably this is what you’re thinking right now.

I don’t know about you, but here are my experiences with consuming alcohol and trying to speak in English:

Experience #1: Ordering a Taxi and Trying to Make Small Talk With the Driver

The house party was coming to an end, and in order to get home from our friend’s place we had to book a taxi.

It mightn’t seem such a big deal, but then again you have to bear in mind I’d consumed some alcohol during that house party!

What normally would be a straightforward phone call, turned out to be quite an embarrassing experience for the simple reason that I just couldn’t speak properly…

I literally seemed as if I’d forgotten 80% of the English language within a matter of hours, and it’s all because my ability to speak in English was hindered by the alcohol.

My attempts to make small talk with the taxi driver were also futile because I constantly kept getting stuck for words and to my utter dismay I realized I sounded as a struggling foreign English speaker who’s learned the basics of English only recently. And all that despite the fact that I could speak in English perfectly just a few hours prior to the damn house party!

If you’ve been following my blog for a while, you’ll know I’m a teetotaler (a person who doesn’t drink alcohol) and I’ve been abstaining from drinking for a number of reasons one of which becomes quite obvious when I’m in a company of native English speakers.

My brain is not firing on all cylinders when I’ve become merry, and one of such bad experiences happened when I went to a rock concert in Dublin with a bunch of Irish guys.

I could speak with them very well when they picked me up in the van they’d hired for the occasion.

The more beer was consumed, the less eloquent I became.

By the time the concert had started, I could barely speak with the Irish lads – and not because I would have been totally plastered (it’s a synonym for being drunk). I’d had just a few beers and if I’d been in a company of other Latvians, it wouldn’t have constituted a serious communication problem.

The fact that my brain had to deal with speaking in English while under influence of alcohol, however, made all the difference in the world!

Experience #3: Going to a Pub with my Irish Work Colleague

My family had gone for holidays leaving me home alone, and one fine day I invited my work colleague to stay over in my place.

I didn’t plan for anything mad – just a visit to one of the local pubs where we’d discuss work problems and also share some personal stories at a pint of Guinness, then we’d get some take-away fast food and be on our way home.

The night went on all right, if not for a fact that the more Guinness was flowing, the less I was able to speak!

Not that my Irish friend would have been too concerned about it – more often than not other people don’t even notice mistakes you’re making when speaking in English and I’m pretty sure the fact he was also slightly inebriated (also another synonym for ‘drunk’) worked in my favor!

One way or another, all such and similar experiences clearly indicated the unmistakable links between the amount of alcohol consumed and my English fluency issues.

Needless to say, I’m choosing to stay sober at all times so that I can make sure I don’t encounter unexpected English fluency problems!

My Theory on Why It’s Happening

When you consume alcohol, even your ability to speak in your native language is affected.

You may say things you don’t want to, your speech may become slurred and you may start stuttering – and all that despite the fact that your native language has been engrained into you since an early age.

It’s only natural that the more drink is consumed, the poorer your performance becomes in the spoken English department!

Let’s put it this way: the more drunken you are, the more you start resembling a small child – your jokes become stupid, your behavior is loose and in the worst case scenario you’re falling all over the place and you can barely comprehend what’s going on around you.

Everything you’ve learned during your lifetime – including the English language – is simply leaving you, and you can’t fight it no matter how hard you try.