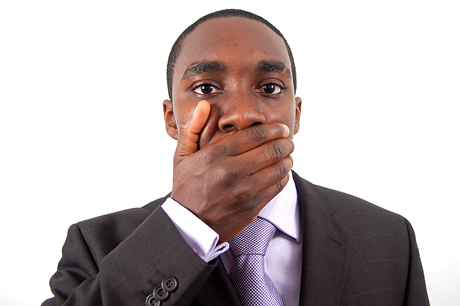 I’m actually tired of repeating the same thing in nearly every blog post but it’s so important that I just can’t help pointing it out once more – you shouldn’t be so conscious of your mistakes made when speaking English!

Today I’m going to provide another good reason as to why you shouldn’t be so stressed out when the inevitable happens and you catch yourself having said something weird – be it a wrong word, a wrong grammar Tense or a wrong word combination.

So, the reason is the following –

when you converse with a native English speaker, they will actually miss many of your mistakes, so your English speech won’t actually sound anywhere near as bad as you think ❗

So if you have a tendency to hesitate and struggle for the rightwords to say and eventually get some of them wrong, don’t be overly concerned about what your conversation partner thinks of your level of English – many of those small mistakes will pass unnoticed.

But in case if you’re wandering how I can be so sure about making such a claim – after all I’m a foreign English speaker and not a native one – here’s the reason. It’s because I’ve actually asked many of my native English speaking work colleagues what they think of my spoken English level on my bad English days and on many occasions they didn’t have a clue what bad English I was talking about!

You see, sometimes when I’m having a down period in terms of English fluency, I struggle a little bit to put my thoughts into words. Over time my fluency has gone up big time because it inevitably happens with anyone living in an English speaking environment, but still I have days when I just can’t perform at a 100% of my ability.

So whenever I drop the question to any of my native English speaking colleagues – “By the way, have you noticed that today I keep struggling to find the right words to say and I hesitate all the time?” – their response is pretty much the same – “Well… Not really!”

Surprise, Surprise – Others Have Their Own Worries, Too!

It’s in our human nature to focus on our personal problems and issues just because… well, just because their OUR problems! We can’t get inside the heads of others and know what their minds are occupied with, so when in presence of others we tend to believe we’re always in a spotlight and it’s always our conversation partners who scrutinize us.

In reality though, other English speaking people are normal persons just like us and while they may not have issues with their spoken English most likely they have something else on their mind to keep them distracted just enough not to notice the odd mistake you make when speaking with them.

I actually hadn’t thought of this before my work colleague William pointed it out to me.

When I was complaining about struggling to find the right words when speaking on a particular day and that others would definitely notice it, he said – “Listen Robby, why do you think others are always so focused on the way you speak that they would spot every single mistake you make? They will hear from you only what they want to hear because they have enough on their minds to keep them concerned!”

Right after he said that, the importance of it struck me and I realized that it must be true at least to some extent. I suddenly saw how egocentric it is to assume that I’m the center of it all and that others always must be analyzing and paying a very close attention to how I speak and exactly what words I’m using.

The average person has plenty of things going on in their lives, and most of the time their preoccupied with something – be it an ongoing problem in their relationship, financial issues, forthcoming college exams, whatever.

And even if the person you communicate with doesn’t have any of such issues to keep them distracted, you have to keep in mind that humans are very well capable of perceiving information despite any errors contained within it!

I bet you could read and understand the above headline – am I not right?

I’m no scientist, but I’ll hazard a guess why you could. It’s simple enough – even badly misplaced letters couldn’t prevent your brain to recognize words it has seen tens of thousands of times. There is no such word as ‘naitve’ in the English language and the only closest match is ‘native’; same goes with other words in the headline.

Now, imagine it’s you who makes a similar mistake when speaking. Let’s presume you mispronounce a word, or you get a word ending wrong. Considering that such a mistake definitely wouldn’t be as noticeable as the ones in the headline above, it’s quite clear that your conversation partner won’t have any problems with perceiving your verbal message regardless of it. And, what should be of the biggest importance to you is that they might not even spot such a mistake ❗

So, as we concluded previously in this article, people wouldn’t be normally so focused on your speech and many of your mistakes would pass unnoticed. On top of that, there’s a big chance they’ll be filtered out because the person you’re having a chat with hears everything you say in a context – and just like when reading the headline above many mistakes will blend in and disappear.

It might not always be the case when speaking with foreign English speakers as they generally tend to be more conscious of what’s being said. Native English speakers, on the other hand, are more likely to pick up meaning of your sentences from half-word. After all, the English language is so deeply ingrained into their minds that they have to pay less conscious attention to details to get the whole message; it also means they’re most likely to miss an odd mistake made by a foreigner – unless they’re expecting them, of course!

The bottom line is – if you’re very concerned about making mistakes when speaking with native English speakers, you can put your mind at ease. They’re nowhere near as perceptive of your mistakes as you would have thought because they’re most likely to perceive your verbal message as a whole!