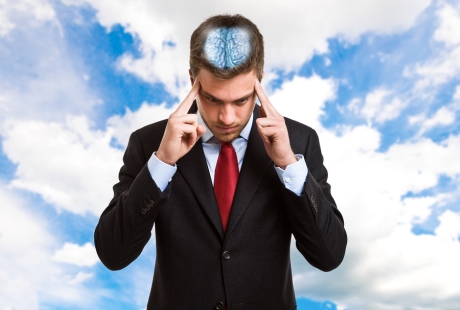 We all speak our native languages fluently, quite naturally. The speech formation happens instantaneously and we don’t actually differentiate between a number of subsequent processes taking place when we speak.

If I asked you to draw a simple scheme of a speech process when you speak your native language, you’d probably come up with something like this:

By and large it’s quite correct – we think in our native language and after a short while we produce speech in the process. If you think that it’s not true and you’re capable of producing speech at the exact time of thinking – read this article. You’ll find out that it actually takes 600 milliseconds for our speech producing organs to catch up with our brain! It’s not a huge lag, and in real life we all have an impression we can think out loud.

Anyway, the scheme above represents what goes on when you say something in your native language, and thinking and speaking are two separate processes. But now comes the tricky part of the process. I think that we’re missing a link right before the thinking stage…

Are you slightly confused? Are you thinking “What is Robby talking about? What other process takes place in my brain before I think? Surely thinking comes first and everything else follows it!”

Well, I haven’t got any proof that my theory is correct, but I believe that an ABSTRACT CONCEPT comes first ❗

It’s not verbalized. It’s an idea. It’s something that you kind of FEEL even before you start having actual thoughts in your language. It’s not easy to explain, but I’ll try to provide an example so that can understand what exactly I mean by this abstract concept.

You have to picture the following scene. You’re waking up in the morning. You open your eyes. You’re feeling unwell – you’ve sore throat, blocked nose and a fever, too. Now try to focus on this feeling and tell me – isn’t there an abstract concept of taking a sick day forming in your mind even BEFORE you have the conscious thought “I have to ring in sick…”? Isn’t there? That sort of a feeling, awareness if you like, that isn’t verbalized YET, but you just KNOW that it’s there?

Maybe I sound mad, but I strongly believe that everything begins with an abstract concept. Our thoughts. Our plans. Our daily activities. They all begin as abstract, vague ideas hovering in our minds and they have the potential of being transformed into thoughts and then spoken out: 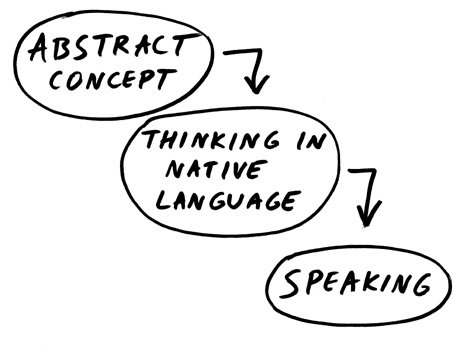 I might even take this concept a step further and claim that at any given time we all have at least one or more dormant abstract concepts present in our minds. I think it takes some stimuli to awaken them and initiate active thinking process when you can actually make out words floating around your mind.

I won’t, however, elaborate on the above concept in this blog post – instead let’s get straight to the point and look at the biggest mistake made by foreign English speakers: 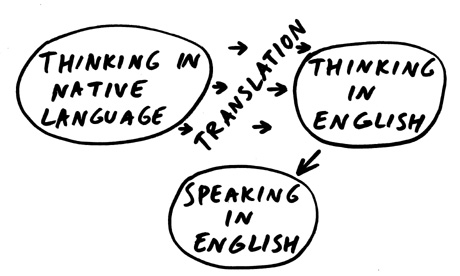 For a number of reasons English learners and even quite advanced English speakers assume that once you speak a foreign language, the translation stage is inevitable. It’s being made our second nature in school English studies by using bilingual dictionaries and memorizing new vocabulary as a direct translation from our native language into English. We also encounter the translation process on a regular basis – movie subtitles, manuals that come in multiple languages, Google translation tool… It all adds to the general consensus that the translation stage between languages can’t be avoided and you become convinced that once you speak your own language you need to translate to speak in English.

But what if you could eliminate the translation process? Wouldn’t it speed up your English speech, for example?

Just think about it for a second. If it takes your mouth more than half a second to produce speech following a thought in your brain, what about the extra time you spend translating the thought from your native language into English? It definitely adds more time to the whole process and the resulting speech is often slow, hesitant, and it’s easy to get stuck for words if you keep translating from your native tongue into English in your head.

By the way, these symptoms characterize the typical English fluency issue and translating in one’s mind from native language to English is a definite no-no if you want to be fluent!

Stop Thinking in Your Mother’s Tongue!

Yes, you need to eliminate the translation link, but you also need to eradicate the very process of thinking in your native language!

If you already think English – fair enough, you’ve mastered the skill and you can skip the rest of this article.

If you still keep having two “layers” of thoughts in your mind – your native language AND English – then keep reading, this is for you!

So, what you basically need to do is the following – you need to learn to verbalize the ABSTRACT CONCEPTS into English. You need to make your speech process look like this: 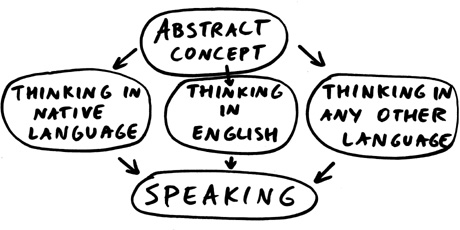 First you have the abstract concepts and images floating in your mind. Then comes thinking process in the language you speak, and then you produce the actual speech. Once you do away with the translation between your native language and English, your speech becomes more fluent and automatic. It’s of course easier said than done, so here’s a really good piece of advice on how to achieve the state of mind when you’re able to think in English without getting your mother’s tongue involved.

YOU HAVE TO GET INTO HABBIT OF SPEAKING IN A CONTROLLED, STEADY MANNER!

Remember when we analyzed the speech process in the very beginning? You probably didn’t realize prior to it that our thinking process and speech are two separate processes because they’re so closely bound, right?

Well, you see – now you can use this fact to you advantage and make your brain THINK in English by SPEAKING English. The speech process is so closely bound to your thoughts that it will make it quite hard for you to think in your native language when you have a steady and controlled speech going on.

If you try to speak too fast though, you can lose the concentration and your native language words can start mixing in ❗

I’m not saying it won’t happen AT ALL when you speak in that slow and controlled manner. But it won’t be as bad as when you try to match a native English speaker in terms of speed and have English thoughts mixing with your native language in your head.

So your perfect English speech process follows this pattern – an abstract concept – thinking in English – speech. Well, in reality all you’ll feel is the speech because the feedback between your mind and mouth is nearly instantaneous. However, it is necessary for you to understand the very nitty-gritty of the speech process so that you can accept that it is possible to stop translating from your native language when speaking English.

Once you’ve grasped the very concept of abstract ideas being as the primary source of “content” for your brain to “feed” on (not thoughts in your native language as you might have assumed previously), you’ll find it much easier to eliminate the translation link from the English speech process equation.

I guess it’s going to take some time for you to master thinking in English because you’ve been speaking your native language for as long as you remember yourself, so the very thinking process inevitably associates with mother’s tongue. It’s kind of – “How can I stop thinking in my language, it’s so deeply ingrained in my brain that it’s impossible to start thinking in English!”

Well, as I said, the trick is to actually SPEAK English as often as you can. If you try to ONLY THINK in English – yes, you can mess up your mind even more (watch a video about it HERE!) because there’s no solid ‘stuff’ (like SPEECH) for your English thoughts to stick to. Once the speech process is engaged, however, it’s much easier to maintain clarity of your English thoughts as you wield more power over speech than your thoughts which can often take course on their own.

I can say it after my own experience over the years – constant English speaking practice will help you think English and gain spoken English fluency! You can even quietly speak with yourself in English when you’ve no-one to talk to instead of thinking something silently at yourself in your native language!