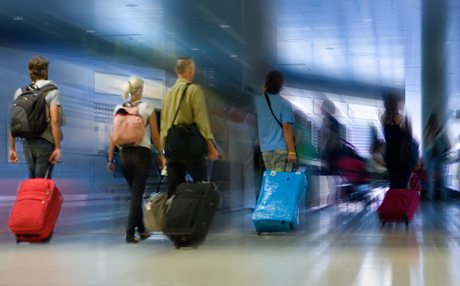 1. Native English speakers will judge your ability to speak English based on their experiences with you – not your true knowledge. Why? Simple – all they can see is your performance, they can’t get inside your head!

It’s just a fact of life – you’ll be judged based on how you respond to certain situations, and you’d better be prepared to face up to some challenges if you want to come across as a good English speaker!

Basically what I’ve learned is that it’s not necessarily about how well you ARE ABLE to speak in English; on most occasions it’s more important to be able to react fast, not get tongue-tied and ignore your own embarrassment (seriously, it’s not that hard. If it helps, tell yourself that even native English speakers get tongue-tied sometimes!).

Let me give you an example.

The other day a big customer of ours had arrived and we were all having a chat in our knitwear factory’s hall. A couple of Polish girls happened to walk by having just finished their shift and our man said something to one of them – just a friendly jest.

The Polish girl obviously didn’t get what he said to her, but instead of saying “Excuse me, can you say it again?” she just smiled awkwardly and walked away.

I know for a fact she has no problems speaking in English despite her language not being grammatically perfect – I’ve heard her speak with other foreigners.

Such and similar experiences, however, have given my Irish colleagues enough reason to believe her English is nearly non-existent. How can I be so sure of it? Well, I’ve heard quite a few comments made about it, and it saddens me to witness the Polish girl being spoken to as if her understanding of English was very, very basic.

Not standing up for herself in situations like this, however, is the main reason why it happens, so please bear in mind – regardless of how good your English is, you’ve got to make effort to get involved in conversations – even if you make a few mistakes here and there.

The latter ones might be even ignored, but the fact that you blushed and didn’t know what to say sends a completely wrong message to your native English speaking friends at work or college.

Not that you should be overly concerned with what others think about you – it’s just that you should be aware of the fact that native English speakers don’t realize how difficult it sometimes is for us, foreigners, to make out what they’re saying, for example.

Your task, therefore, is to be PROACTIVE and dissipate that impression by proving you’re capable of participating in a normal conversation.

Just brooding to yourself over how stupid everyone is not to see your true potential as an English speaker won’t make you better at speaking with people!

2. Your ability to understand what native English speakers say depend not so much on your academic knowledge than on your time spent among them!

All those years ago back in 2002 when I came to Ireland, there were a few of us, Latvian chaps, who stuck together to make our lives easier in the foreign country.

One of them was particularly good at English. To tell you the truth – he was much better than me in terms of fluency and pronunciation, and I was actually envious of his ability to speak with a near-native American pronunciation.

He was quite bad at understanding what the locals were saying to him and he found himself in all sorts of awkward situations. Of course, he could have made it much easier for himself had he just admitted he didn’t understand something. On most occasions, however, he was too proud to admit that someone with such a perfect American English pronunciation could not understand simple things that local Irish people were saying.

Another fellow who’d been living in a number of different countries all over the word including Australia and Sweden, on the other hand, was completely comfortable among Irish. His own English was far from perfect, but he had spent plenty of time among English speakers from different geographic backgrounds and that made him really good at understanding most of what others would tell him at work.

I actually remember this chap telling me how he and the other guy were having a chat with a couple of Irish truck drivers and they were telling a joke. When everyone broke out in laughter, the perfect American English speaker was looking at them perplexed, and later on he asked his fellow Latvian what the joke was about…

The whole point of me telling you this isn’t to prove that trying to speak with proper pronunciation is bad, or that you shouldn’t be striving for constant English improvement and just speak without caring about flaws in your English.

The bottom line here is the following – you may find that your understanding of native speakers differs greatly from your English understanding in terms of reading, for instance ❗

And don’t you worry, I’ll reveal my personal little secret to you – I’ve personally never been particularly good at understanding native English speakers in real life, on TV etc.

I still have my moments when I get them wrong – especially when someone says something to me I don’t expect. For instance, one of the managers at my work said to me today as he walked by “You’re a devil tearing up cardboard!” because I was cutting up cardboard boxes at that moment.

What I heard was – “You’re given terrible cardboard!” – which didn’t make any sense to me. The reason why it happened is because I’d never heard something like that before and my mind was just trying to make up something. I did hear the “you’re a…” and “cardboard” parts, but the rest just didn’t come together until my colleague Will explained to me what the manager had actually said.

Make no mistake though, my English understanding is very good after so many years spent in the country, all I’m saying is that your ability to understand others may lag behind other aspects of your English language.

What you should do with this information?

Well, basically there are two things you have to bear in mind:

3. Many of your mistakes will pass unnoticed as far as you’re sociable, friendly and you speak fluently irrespective of those few imperfections.

IMPORTANT! This lesson is actually probably the most important thing you’ll learn about communication between foreign English speakers and foreigners ❗

This is one of the biggest fears so many foreign English speakers are facing – fear of making mistakes.

Its roots go deep inside your subconscious and at a primal level you actually fear of being rejected because you’re not able to speak the same way as the native speakers around you. Being part of a group is crucial for survival; it’s wired into us so this fear is good from the evolutionary point of view. At the same time this fear of being rejected makes some of us very bad at communicating in English with others.

What I’ve realized over the years is that when native English speakers speak with a foreigner, they don’t necessarily watch out for mistakes and flaws.

It’s only our heightened awareness of our own mistakes that makes us believe everyone else is feeling the same way about our performance.

In fact, sometimes it couldn’t be further from the truth!

When a native English speaker is speaking with you as an equal and not being judgmental, their perception will often ignore imperfections of your speech and they’ll perceive your verbal message as a whole.

It happens to me on a regular basis when I’m having conversations with my work colleague Will – I catch myself making a small mistake, then I correct it, but if I ask Will if he’d noticed me making that mistake – the answer often is “No, I didn’t even notice you said that!”

It’s very important that you understand the full extent of this principle, my friend!

The moment you realize it’s NOT the eradication of mistakes you have to aim for, but rather natural fluency at the best of your ability – that’s when your confidence and ability to communicate with native English speakers reach new heights.

Your date with an English speaker will go down perfectly – as far as you’re confident he or she doesn’t notice your mistakes.

Your job interview will possibly land you that job you’ve been wanting badly – and all because your positive attitude creates an easy-going atmosphere and your interviewer doesn’t notice that clumsy choice of words when you describe your job duties in a meat processing factory.

Your meeting with a property agent will hopefully result in a great deal because you’re making a couple jokes and despite the wrong English grammar tense you just used the agent is actually laughing his head off and never notices the small mistake.

So, these are the three lessons that my 10 year long stay in Ireland among native English speakers has taught me, but I assure you they’re not the only ones.

Just stay tuned in and I promise you’ll find out more in the future! 😉