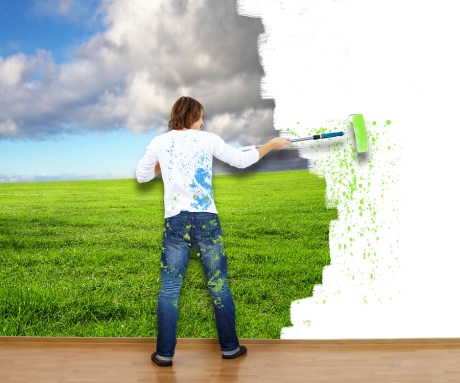 To tell you the truth, my friends, this has been the busiest summer I’ve ever had in my life so far!

I’ve been spending days in my 9 to 5 job, and my evenings and weekends were spent on redecorating my new house. And I’ve got to tell you – it was one hell of a job!

Even though professionals got hired to do most of the heavy lifting, there was still a lot for me to do. And don’t get me wrong; the job isn’t anywhere near finished. Right now I’m sitting in my office staring out the window with no curtains and running my laptop on a battery because the socket hasn’t been connected to the mains yet!

Anyhow, throughout all the stress and hardship I had to go through while dealing with the plumber, electrician, window repair men and a bunch of other folks, I’ve learned a thing or two about DIY and related stuff.

Here’s a list of new English DIY related phrases and terms I’ve learned this summer while redecorating my house, and who knows – maybe you’ll find some of them handy when engaged in similar activities!

Tile adhesive – turns out the glue-like stuff you smear onto a wall to make tiles stick isn’t called “tile glue” – which is exactly what I asked one of the local hardware store shop-assistants! Sure enough, he figured out pretty quickly I was looking for tile adhesive which is the correct industry term, and I’ve been using the same term ever since!

Skirting boards – these are the boards attached to the bottom of walls where the wall meets the floor, and the simple fact is that prior to this summer I didn’t know this term because I’d never had to use it! And even now I don’t really know the exact meaning of the “skirting” part in this collocation (don’t know what a collocation is? Check out this article!); all I know is that a “skirting board” is the white board going all the way around the room.

Coving is something quite opposite to a skirting board; while the latter joins the wall and the floor in a nice way, the former does the very same job to the corner formed by the wall and the ceiling. How I learned this new English word? Simple enough – by a way of mimicking the plumber working in my house! One day he pointed at the ornate girdle surrounding the room at a ceiling level and used the word “coving”; next time around I had to mention the same thing in a conversation I used the newly acquired English DIY term!

To prime a wall means to prepare a wall for painting by putting a while coat of paint on a surface such as a plasterboard or plaster. In other words, it means to make the wall ready for putting on the paint of your choice, and when I looked into it for the first time, I had no clue as to how it’s said in English! When I started looking into it on YouTube, soon enough I learned a bunch of new painting related English terms, and wall priming was one of them. Another one I learned is…

… a coat of paint, and that’s how you properly describe a layer of paint you put either on a wall or any other surface for that matter. Previously I would have said things such “how many layers of paint do I have to put on a wall?” Now I know for a fact I have to use the proper DIY industry term “a coat of paint” to avoid any potential misunderstandings in hardware shops!

Double glazed and triple glazed – this is how you describe windows containing more than one sheet of glass. Once again I have to admit that prior to getting my house fixed and installing brand new windows, I wouldn’t have known that “glazing” in terms of windows is used in order to describe the number of sheets of glass; the closest I would have come to touching upon this subject would have been when looking for a new house to rent and making sure it’s warm enough by asking the letting agent a question “Are these double windows?” The moment I started looking into this matter a bit deeper, I came across this term however, and that’s exactly how one acquires and builds one’s English vocabulary!

Rewiring a house is another English term I had to learn this summer when moving into the new house. New for me, that is! The house has been built back in 1976 (a couple years before I was even born), so it’s quite old and I had to figure out whether the existing electrical cables had to be replaced with newer ones. My first question to the electrician was “What do you think, is it necessary to replace the old electrical cables with new ones in this house?” to which he said “No, I don’t think you need to go for a full rewiring of the house!” That’s how I learned the process is called “rewiring” and thanks to the fact I had to use this term many times over in the weeks to come, I imprinted it into my brain permanently!

One thing I love about the English language is its simplicity. In my native Latvian, for example, we would have a unique term for each kind of specific paste used to fill in cracks and gaps in walls and floors. In English it’s much simpler; you just name the thing you want to fix and follow it up with the word “filler”:

Basically you don’t have to know WHAT the substance is made of to be able to get it in a hardware shop (which would be the case in my country). All you need to know is the word “filler”, and you’ll be understood just fine. Even more than that – not only you’ll be understood, but you can also rest assured you’re using the right industry term as well!

Now, this short list of new English DIY terms barely scratches the surface of new English vocabulary I had to learn while communicating with dozens of construction industry professionals – not to mention countless trips to the local hardware and furniture shops.

It’s fairly representative of what I’ve been going through this summer, however, and I think I wouldn’t be wrong in saying that I’m a living proof of how effectively English can be learned and improved if one uses it as means of communication in real life as opposed to a purely academic subject.

What do you think my friends?

Tell me more about it in the comments below! 😀