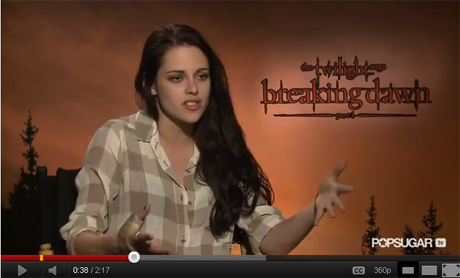 A while back I published a blog post where IÂ analyzedÂ Benicio Del Toro’s interview. I did it in order to prove to any of you that even native English speakers will hesitate, use simple, short sentences and sometimes even say complete non-sense when asked a question they haven’t had time to think about properly!

So is it such a big deal if we, foreign English speakers, can’t say something straight away when we get stuck in a middle of a sentence or can’t wrap words around our thoughts? Of course it’s not!

There are only two things that make us different from native English speakers – we hate when others make assumptions about our level of English and many of us are perfectionists trying to finish a sentence once we started it and also trying to make it perfect in terms of grammar and word choice.

If you learn to ignore those two factors, however, I don’t see any reason why you couldn’t give an interview just like Kristen Stewart from Twilight did – or even a better one!

Now, watch the video below, listen carefully to the whole interview and then read the rest of this article. It just might make a big difference to your spoken English confidence, my friend! 😉

Interviewer: “So tell me a little bit about this movie. You know… For Bella it’s really about growing up and changing… And how do you feel like you’ve kind of grown and changed since the first Twilight?”

Kristen: “Well… I mean… I guess on two different levels… eh… It’s so much easier for me to talk about things that matter… They don’t crush my skull anymore, do you know what I mean?”

Notice the hesitation filler words she uses at the very start – ‘well’ and ‘I mean’ – they’re typically used when you’re considering the question and that’s what Kristen is obviously doing!

The next sentence – “I guess on two different levels…” is just a start of a sentence which she cuts short because it’s not what she REALLY wants to say, it’s just something that’s going on in her head before she decides what it is. And when she says it, it sounds very simple and to be honest with you – itÂ doesn’tÂ make an awful lot of sense to me.

The answer to the question about how she feels she’s changed since the first Twilight movie is that she can talk about things that matter and they don’t crush her skull… Well – all I want to say is – if you say something stupid or make a mistake during an English conversation, you definitely have nothing to worry about!

Interviewer: “So what would be something that matters then?”

Please notice how often she says “I mean” and “Do you know what I mean?” You can definitely learn from that and if you find yourself in a situation when you’re getting tongue-tied, you can say it as frequently as you want. Seriously, if Kristen is getting away with so much stuttering and starting new sentences and cutting them short after a few words – you can say all you like just to get the speech going and buy more time to consider the actual answer!

And even when she does get to the point, the answer is quite elusive and doesn’t give a full picture of what it is that really matters to Kristen:

“I think I’ve gotten… I’ve gotten to a place we I really… I really enjoy talking about things that… that are important to me and so amhh… basically right now I’m talking to you but I’m actually talking to the world, and so I’ve wrapped my head around that a little bit more.”

I think that the lesson to be learnt from this is – we foreign English speakers don’t have to worry too much when we say something that doesn’t make sense when speaking with an English speaking person! Native English speakers do it, so why can’t we be forgiven for allowing stress and embarrassment to get the better of us?

Interviewer: “Now you’re sporting a little bit of a battle scar there I noticed. So have you been doing a lot of your own stunts on some way?”

Kristen: “I do what I can. I hurt myself constantly! I don’t know what happens… like I can’t… I can’t keep myself from… I can’t be careful!”

Once again – notice the simple word choice – “I hurt myself”, “I can’t be careful”. Imagine you were sitting in front of a camera instead of Kristen and you had to answer the question. You would probably get tongue-tied and completely stuck because you’d be trying to do the opposite – say something VERY SMART and use very SOPHISTICATED WORDS. As you can see there’s really no need for it and you just have to accept that it’s totally OK to use very simple phrases when speaking in any situation.

Interviewer: “What kind of things have you done that have gotten you a little band up?”

Kristen: “I’m frantically running constantly in this film. And th… amhh… Everything is slippery! I’ve done… I’ve… My… My knees before I got here – it was good timing. Everything kind of cleared up… But like, I’m bruised to the bone! Like… everywhere… I.. I pulled my foot the other day… I hurt my hand.. Like I have a lot of different.. a lot of different little elements that I’m nursing recently. Which kind of makes you a little bit more like – this is a rough road, you know what I mean? God job!”

Once again – simple, short sentences, saying out loud what you think without trying to construct perfect, meaningful clauses – you should definitely go down that road if it allows you to speak English with somebody instead of getting constantly tongue-tied!

Interviewer: “Now did you ask Rob for any help like working on your British accent?”

Kristen: “He pissed me off so much throughout that all process! He’s heard it now and he’s like you know… He’s like – wow, sounds pretty good! But initially I think he just likes to mess with me and I was so sensitive about it ‘cause it’s a bit deal! And if you mess that up it’s so… It’s not… It’s… It’s a technical skill! You’ve got it or you don’t! And he is very Americanized… Sounds like – you don’t know what you’re talking about any more! You don’t even know where you’re from!”

Here Kristen is opening up a little bit and it just goes to show that fluency is in big part related to WHAT YOU ACTUALLY HAVE TO SAY ABOUT THE TOPIC!

Same goes with foreign speakers’ ability to speak fluent English – if you’re asked something you don’t know a great deal about, how can you be expected to deliver a super-eloquent speech?

We can only guess whether Kristen was a bit stressed out throughout the whole interview, or she just didn’t know what questions she was going to be asked. At the end of the day all that matters is that she said something and remember – THIS IS ALSO RELEVANT TO US, foreign English speakers!

On the finishing note I have to tell you that I’m not advocating for wrong usage of the English language and I’m not saying – “Hey, speak as you want and don’t care about proper grammar at all!”

The point I’m trying to make here is the following. You’ve been learning English for years, and you’re a great English reader, writer and speaker. When stress and embarrassment gets the better of you, however, you may get completely tongue-tied in the middle of a conversation and that’s something many of us, foreigners, are familiar with. Well, THAT’S when it’s fine to follow Kristen’s example to get your speech going.

After all, if you had to choose between perfection which you CAN’T DELIVER and mediocrity you CAN at that particular moment in time, which one you would be going for?

I’d definitely go for the latter one, and I hope you would do the same, my friends foreign English speakers ❗

P.S. Would you like to find out why I’mÂ highlightingÂ some of the text in red? Read this article and you’ll learn why it’s so important to learn idiomatic expressions and how it will help you to improve your spoken English!