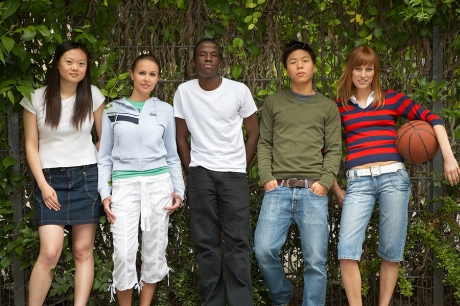 I have a friend who’s made incredible achievements in terms of his professional life and he’s also very comfortable when it comes to his finances, but quite often he would tell me how much more he would have achieved if he’d been born in an English speaking country.

While I can’t deny that there’s a lot of truth to what he’s saying, I can also tell you that being a foreigner isn’t always a handicap – especially if you know what you want to achieve in life!

Here I came up with a list of things that should open your eyes and make you realize how lucky you actually are having been born a foreigner!

If you’re a foreign English speaker, you’re a bilingual person by default, and there’s a very good chance you can speak three or more languages which is clearly an advantage in many life situations.

Personally I speak 3 languages – English, Latvian and Russian, and I know for a fact that a lot of other Europeans speak multiple languages due to specific socio-political reasons.

It might not seem like a big deal to you, but believe me – many native English speakers would give their right arm to be able to speak a foreign language so your foreign language skills are not to be taken for granted!

2. Your life is more exciting!

This one might seem like a really lame reason to be happy about your foreign origins, but the more you think about it, the more sense it will make!

You’re a foreigner English speaker, so you’ve been born in a foreign country, I guess it’s pretty straight-forward. Now, the chances are that at some stage during your life you’ve emigrated from your native country in search of a better life – just like me back in 2002.

Is there anything more to add to it, my friend foreigner? My life in Ireland has been one hell of a journey, and I’m sure you also have a couple of interesting stories to tell about moving abroad and all the related joys and disappointments. Sure enough, our lives haven’t always been easy, but there’s one thing I can say for sure  – they’ve never been boring!

3. Your professionalism is going to be valued even more if your English is up to the standards!

I don’t know what you think in relation to this, but I have a feeling that if you speak with other people in fluent English, it sends out a strong message that you’re a true professional and overall organized person.

You may argue that quite the opposite is actually true and native English speakers will always have the upper hand when it comes to being chosen as the best candidate for a specific job, for example.

There’s a certain degree of truth to it, but it’s only true as far as the foreigner in question falls short of their employer’s expectations in terms of spoken English ability. If you’re a very competent foreign English speaker, the potential employer’s reasoning will go along these lines (or so I believe):

Of course, it’s not always the case; however, I have a strong conviction that on many occasions your overall professionalism is going to be judged by your English fluency level and it definitely works to your advantage provided your English comes up to the standards.

4. Being a foreigner adds a certain amount of mysteriousness to you!

You have to admit that being a foreigner is definitely an advantage to actors, for example. Celebrities like Antonio Banderas would have never probably achieved the amount of fame and glory had they not been born foreigners, and I could actually name a whole array of other actors having been propelled into the stardom largely due to their foreign accent and foreign looks.

We’re no celebrities, of course, but you can’t deny that the same concept sometimes applies in ordinary people’s lives as well.

If you’re a foreigner working among locals, for example, you’re almost guaranteed to pique the opposite sex’s interest in you because your foreign background will appeal to them more than their native counterparts.

Whenever I check the latest job openings across industries I have experience in, I can see an overwhelming demand for multilingual specialists.

Technical Support and Help Desk operators providing customer support to overseas customers are a vivid example of such jobs, and while it might not be as popular in the States as it is in Europe, I’m pretty sure that such jobs exist pretty much anywhere on the planet!

I don’t doubt that if you’re an experienced native Spanish speaking Tech Support operator, for example, and you speak fluent English on top of it, your prospects of getting a job in the industry are probably even higher that of some native English speaking person’s with an equal skillset but with no language skills.

Throw in the third language – and you become really invaluable!

There was a time when I was on the same team with a Spaniard who spoke fluent English, Portuguese, French, Italian and he’d also started learning Russian. Now, without a shadow of a doubt – it’s almost impossible for that guy to be out of work for his language skills alone, not to mention his experience as a call center operator!

6. Your striving to improve your English improves other aspects of your life

I stand by this claim and you won’t be able to refute it, my friend, no matter how hard you try to! I’ve been working on my own English relentlessly over the years, and I can tell you with all honesty that I definitely wouldn’t have achieved a lot of things in my life if not for the pursuit of English fluency.

By the way, I recently published a blog post called When You Improve Your Spoken English, You Improve Your Entire Life Along With It!, and you may want to check it out in order to see exactly why I’ve drawn this conclusion.

7. Moving to an English speaking country can only raise your life standards

Personally I was born in one of the former USSR republics, and it goes without saying that I was struggling financially right up to the moment I decided to emigrate.

I’m not ashamed to admit that I’d rarely held as much money in my hands as when I received my first week’s wages in Ireland, and within a few months my bank account balance had reached a figure I wouldn’t have even dared of dreaming about in my previous life.

It’s just a fact of life that for many of us, foreigners, are born in countries where the average monthly salary is the same as a decent day’s pay in the Western world, so our life standards can ONLY go up if we ever decide to emigrate!

Basically the bottom line is the following:

Fair enough, a lot of you guys might come from some other countries where life standards are probably even higher than those of the States or the UK – Scandinavian countries, for example, or some rich Arab country. By and large, however, I guess most of us, foreigners come from places where many ordinary people are literally struggling to put food on their table.

So, that’s about it, my friends!

Can you think of another reason why we should be proud foreigners?