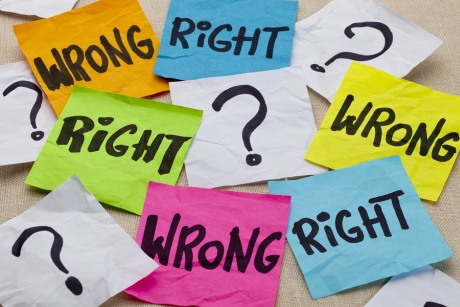 Back in the day when I was a perfectionist regarding the English language, I thought that English grammar rules are set in stone and I used to question and analyze every new English word or expression I came across.

It’s no wonder therefore that I thought idiomatic expressions such as “Long time no see! ” were grammatically incorrect while in reality nothing could be further from the truth!

You see – some things we say in English aren’t subject to any rules, we JUST SAY THEM and if you start questioning them, you can only make matters worse by confusing yourself to a degree you can’t even speak fluently.

Being the perfectionist that I was, I would always take the academic approach and try and put some sort of a structure on everything I would read or hear in English; if something didn’t make sense to me, I would label it as being WRONG.

Needless to say, my ability to speak was next to none back then for the simple reason that  my textbook-based English was only good for doing grammar tests and constructing grammatically correct sentences on a piece of paper. Whenever I tried to speak with real people in real life, I would apply the same analysis as when writing and doing grammar tests, but the simple truth is that you just can’t speak fluently when you’re constantly questioning yourself and your conversation partner.

On top of that, I was fairly stubborn as well, and I just wouldn’t take other people’s advice on board because I was so self-absorbed that I thought I knew everything best! 😀

When I came to Ireland 11 years ago, there was this other Latvian guy who started working for the same company and we became quite good friends in the end.

The thing about his English was that he spoke quite fluently while at the same time his grammar wasn’t quite correct. I, on the other hand, prided myself in being really good at English grammar (which I thought was the most important thing in the world!), and I have to admit that I judged the other guy because of his bad grammar.

I assumed that everything he said was wrong, so when I heard him using the phrase “Long time no see!”, I just thought he’s getting it totally wrong. I’m not sure if I started preaching him on the proper usage of English tenses, but one thing’s for sure – I would have definitely thought to myself: “He should have used the Present Perfect tense – “I haven’t seen you in a long time!”

Turns out he was right and I was wrong, so the lesson to take away is – DON’T BE SELF-RIGHTEOUS and don’t assume you know everything ❗

The same guy once said “All is OK!” as a response to a supervisor’s question if everything was fine, and I immediately thought – “How can he speak like that! Surely the correct way of saying it is “Everything is OK!”

Little that I knew back then, you can say the same thing in a hundred different ways in English. Yes, “All is OK” isn’t probably the most popular phrase, however, it’s not incorrect either. Just do a quick Google lookup on this phrase (don’t forget to put it in quotes!), and you’ll see it’s used quite a lot (wrong grammar constructs will return very few results on Google – if any!)

I also remember that I chastised the poor chap for saying it wrong, and he responded by saying something I still remember to this day: “Robby, it’s the English language we’re talking about here!”

His message didn’t register with me back then; now it’s all crystal-clear to me – in English you JUST SAY certain things and DON’T QUESTION them!

When I just started off in Ireland, I worked with a bunch of Romanian guys, so I ended up speaking with them most of the time. Their English was good enough, but you can be sure I was picking up every imperfection in their speech with my trained perfectionist’s ear, and when this grammar construct was brought to my attention – “No good” – I thought it’s definitely bad grammar.

You see, I just assumed Romanians said “no good” instead of saying “it isn’t good”, and I completely ruled out the possibility that it might be a valid English expression.

A few months down the line I did find out it’s a 100% correct expression and is used in phrases such as:

It’s all about idiomatic expressions which simply have to be learned off by heart without questioning WHY they’re said that particular way! 😉

When I heard someone use the word “concrete” to describe something specific as in “a concrete example” or “a concrete evidence”, I would also label it as wrong.

Simply because in my native Latvian such a word is also used to describe the same abstract concept, and the word CONCRETE is also a construction material in English, so I assumed it can’t work the same way in English as in my native language.

I was totally wrong though, and it was a good lesson for me not to assume anything but be a bit more open-minded instead!

When some other Latvian guy asked me if the catch-phrase “Elementary, my dear Watson!” is said the same way in English as in Latvian, I told him it wasn’t the case.

I told him the word “Elementary” doesn’t translate directly to the English language, and while I couldn’t provide him with the right word, I assured him that it’s definitely not “Elementary!”

Some time later I found out he was right and I was wrong, and it was another blow to my morale because I thought my English knowledge was superior and I knew everything… 🙁

I’m Angry WITH You!

One or the Romanians I used work with once told me he wasn’t angry with me, to which I said it’s “angry AT me”.

I still kept refusing to believe him, and he just left it at that – obviously he didn’t care about what I thought about it because he KNEW for a fact he was in the right.

Now I know better than questioning things that sound a bit awkward.

Now I KNOW for a fact that more often than not specific English word combinations that don’t make 100% sense at first glance are most likely English collocations that just have to be learned and accepted without questioning!

Between All Of Us

A long time ago I was told by my school English teacher that the preposition “between” is ONLY used when there are two objects concerned; anything more than two demands the preposition “among”.

I took it on board and stuck to it religiously.

Turns out “between all of us” isn’t incorrect – as I would have though all those years ago! – simply because the rule wasn’t interpreted correctly by my English teacher (and those who created the English textbooks in my country at the time).

In reality there is no set-in-stone rule that says “you CAN’T use the preposition “between”  multiple objects”, but I guess a lot of foreign English speaking students have been misled by such and similar “English grammar rules” in the past…

Take-away Lessons For YOU, My Fellow Foreigners!