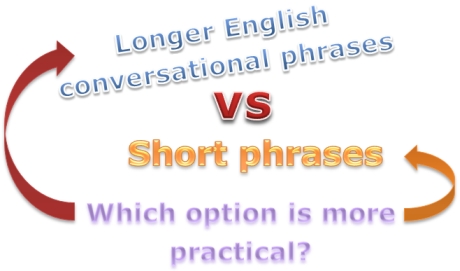 I get this question asked quite often:

Sometimes a single English word might have up to 20 different meanings; how do I know which one to learn?

My answer is always the same:

Here’s what TheFreeDictionary.com returns when you do a lookup on the word VIGOR:

Now, try and learn this entire list, I and guarantee you won’t be able to use the word VIGOR in your English conversations!

It’s simple enough – if you learn these abstract descriptions, you won’t create any associations in your brain between the new word VIGOR and other English words you know.

Human brain works based on associated content, and all you have to do in order to be able to use the new word VIGOR is learn a word combination RENEWED VIGOR, for example.

RENEWED VIGOR = renewed energy – that’s all you have to learn in order to start using the new English word without ANY advance planning as to what and how you’re going to say this or that particular thing!

How do I know what other words the new word goes together with?

Well, I have an answer prepared for this one as well – simply use Google (read this article on how it’s done for the best results).

But here’s the million dollar question:

How do I know how LONG the phrase has to be? Is two words enough? Or maybe I have to learn a whole sentence? I just found this one on Google – COME BACK WITH RENEWED VIGOR – should I learn the entire sentence?

Now, it’s worth looking into the subject a bit deeper so read the rest of this article to find out the ideal length of English phrases you’re learning!

A typical English collocation would consist of two words indeed, such as:

Basically you learn such and similar word combinations (SUCH AND SIMILAR, by the way, is another one of those!), and then you find it so much more easier to use these collocations than the individual words forming those collocations!

Let’s look at the word STARK, for instance.

Surely you’d struggle to use it if you just learned it on its own, wouldn’t you?

In combination with CONTRAST, however, all of a sudden it becomes easy. If you learn that you can say STARK CONTRAST whenever you describe a very distinct contrast between two VERY different things, you don’t even have to learn the EXACT meaning of the word STARK; you just use it ❗

Sure enough, there are collocations consisting of three words instead of just two for the simple reason that you can’t do with fewer words when it comes to certain phrasal verbs – CATCH UP WITH – or certain abstract concepts – A FAR CRY FROM.

But here’s something for you to think about.

The first one – A LAUNDRY LIST – is a typical English collocation describing just about any long list of things you might be going through in your mind or on an actual piece of paper.

The second one – TO RUN THROUGH A LAUNDRY LIST – describes the actual process of going through that list.

Now, tell me which word combination would you find easier to use – the first one or the second one?

To put it in simple terms, you’ll find it easier to use the longer phrase TO RUN THROUGH A LAUNDRY LIST because that’s the most likely context you’ll be using the shorter collocation – A LAUNDRY LIST – in real life.

Is It Possible to Get the Phrase TOO LONG?

If you learn the aforementioned phrase TO RUN THROUGH A LAUNDRY LIST, you’re availing of the most practical way of learning new English vocabulary.

The phrasal verb  TO RUN THROUGH on its own isn’t specific enough for you to use it in your conversations effectively because it’s not associated with another word.

It literally begs the question: to run through WHAT?!

Also, the collocation LAUNDRY LIST, if acquired just on its own, is going to cause difficulties for you to use it because you’re not 100% sure of the following:

Basically it goes back to lack of contextual associations, so you just need to add another word/s to the collocation to make it practically applicable.

TO RUN THROUGH A LAUNDRY LIST is a perfect example of a phrase that’s specific enough (when you’re going through a long list, that’s when you can use this phrase) and also it links the phrasal verb TO RUN THROUGH with the collocation LAUNDRY LIST which is very important because of the following:

When you pronounce the words TO RUN THROUGH, the rest of the sentence is going to follow automatically because you’ve learned the whole string of words together!

But can you be too specific?

What if you were to add another couple words at the end of the longer sentence therefore creating even more contextual links? Would you overdo it?

Let’s say, for example, if you memorized this phrase:

RUN THROUGH A LAUNDRY LIST OF WAYS TO SAVE MONEY

would you have done yourself a favor OR would you have overloaded your brain with excessive information due to which you would be struggling to use any of the phrasal verbs and collocations included in the phrase?

No English Phrase is Too Long!

Let’s take this phrase, for example – RINGED WITH CHAIN LINK, TOPPED WITH RAZOR WIRE (I learned it as part of my 50 American Phrase Acquisition Mission).

You’d think that it’s quite difficult to memorize such a lengthy phrase consisting of 8 words and retain in your memory forever. But is it so?

First of all, you’d be surprised to find out that ANYBODY is perfectly able to memorize such and similar long phrases if it’s done the right way. If you repeat the phrase a couple of times, then you’ll indeed forget it soon enough OR you’ll struggle to recall the EXACT wording (which would be just as bad because in real terms it means hesitating while speaking and not being able to get your verbal message across).

If you use spaced repetition AND make sure you put this phrase in question in a lot of different contexts, however, the phrase simply SOAKS INTO YOUR BRAIN and stays there.

I can say the phrase RINGED WITH CHAIN LINK, TOPPED WITH RAZOR WIRE out loud without any conscious effort whatsoever, and I know for a fact that it’s been wired into my brain permanently.

Secondly, I’m pretty sure that the only reason why anyone might think such sentences might be too long to memorize is FEAR.

Fear of failing to memorize it.

Fear of struggling for the phrase when an opportunity presents itself to use it in a real conversation.

Fear of making a mistake while producing the phrase.

Sure enough, if you allow the fear to hold you back, you won’t succeed whatever it is you’re trying to achieve in life!

If you follow the following rules, however, no English phrase is EVER going to be too long for you:

Rule #1: Don’t FORCE yourself to memorize the phrase. Just repeat it a good few times over a number of days and it will naturally imprint itself into your brain.

Rule #4: You’re OK to improvise if you’re not 100% sure of the wording in this or that particular phrase! You’ll correct yourself later on!

Thanks for reading my friends, and now off you go to learn some English phrases (check out my other blog Easy Idioms where I’m posting regular idiomatic expressions!).

Alternatively, you’re welcome to check out my English Harmony System de Luxe Edition which is STUFFED full with various English phrases and expressions and it’s using unique speech exercising technique to imprint them into your brain!