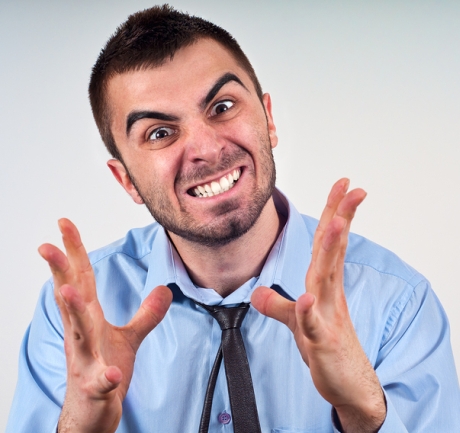 I’d been mentally preparing myself for the upcoming conversation for DAYS.

I’d gone through all the things I was going to say to my boss all over and over again.

When I finally got around to talking to him, it all happened kind of suddenly and I had actually forgotten every little detail I wanted to talk about. Sure enough, I knew what I wanted to ask, but I hadn’t gone through the more detailed plan of the upcoming conversation which I’d worked out previously.

So, when I stood right in front of him asking if he’s five minutes to spare, the stress levels in my body were hitting all-time heights!

My heart was palpitating.

Adrenaline was being pumped through my veins at an accelerated rate.

Needless to say, I found it quite hard to start the conversation because the stress levels were most definitely affecting my ability to say what I wanted to say in English!

Luckily my chat with the boss didn’t turn out to be a total failure because I’ve been learning hundreds upon hundreds of English idiomatic expressions over the years, and the accumulative effect of such practice is such that it enables you to speak in English automatically and without much thinking (the English Harmony System works based on the same principles, by the way!).

Here’s how English idiomatic expressions helped me conduct the conversation in a fairly normal way:

Even When Totally Stressed Out, I Could At Least Say Something!

When you’ve learned a bunch of idiomatic expressions and English collocations, you don’t have to THINK in order to speak them out loud, and that’s by far the biggest advantage in times of high stress.

allow you to say at least SOMETHING even when your mind is in turmoil and you’ve completely lost the track of your thoughts!

Fair enough, if you keep attaching “You know what I mean?” at the end of every sentence, it will indeed sound way too repetitive and any English teacher will tell you such things are better avoided.

I strongly believe, however, that if one has to choose between saying SOMETHING and saying nothing at all (or even saying something incomprehensible!), it’s much better to say the same thing all over and over again than to stutter and say nothing.

The very same thing happened to me during my conversation with the boss – instead of using long, very well thought through  sentences, I was speaking in short sentences heavily stuffed with expressions such as “You know what I mean?” and “To be honest with you…”

They helped me get over the most stressful part of the conversation when I was trying to make the main point, and that’s exactly what you can also do when having similar conversations ❗

And please don’t be afraid of sounding like a broken record; any reasonable person will understand the stressful situation you’re in and will put it down to stress rather than your alleged inability to speak in English properly (well… there will always be people making assumptions about your level of English but you’ve just got to learn to ignore them!)

Certain Words Triggered an Entire Sentence to Be Spoken Out Loud!

This is another benefit of learning English idiomatic expressions – when you hear or think of a particular abstract concept, fitting phrases and sentences are simply popping up in your mind which eliminates the need to frantically construct sentences from scratch in your mind (believe me – the resulting speech is a far cry from being fluent!)

During the conversation I had with my boss, a lot of responses on my side were triggered by what HE SAID, and that’s the beauty of the whole idiomatic expression thing! 😉

When two people speak, one person’s point of view is oftentimes echoed by the other person, and here’s what it would sound like in real life:

“No, I wouldn’t mind at all if you took an extra week of holidays; you can always work those hours in when it gets busy around the same time next year!”

Here’s a couple of related collocations learned over the years working in the company:

Balance of hours worked in

Gets busy around this time

Now, my response happened almost automatically because such and similar phrases are used FREQUENTLY enough between the employees in my company and I’m very comfortable using them (even when having a really stressful conversation in English!):

“Thanks a lot! And yes, I have noticed it always gets busy around this time every year so I’ll talk to our staff manager about the balance of hours I’ve worked in so far!”

Please note the highlighted phrases took me very little effort to say out loud because it’s something I’d talk about with others on a very regular basis, and my boss was actually the one who helped me out with creating this response (unbeknownst to himself!)

Needless to say, every workplace, group of friends, college class or any other social circle of people are using certain expressions more regularly than others, so you should definitely make sure to learn the one’s used more frequently.

They will help you with your stressful English conversations just as they helped me, and if you’re interested in related resources, please check out the following links: