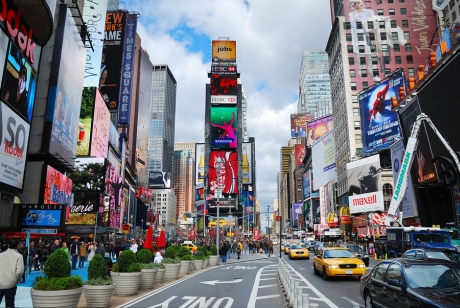 For as long as I can remember myself, I’ve been fascinated with the English language and all things related to it.

I had my first encounter with English when I was around ten years old, and I haven’t stopped loving and learning the language ever since!

Surely, there were plenty of challenges along the way, and I’m not ashamed to admit that I didn’t actually achieve English fluency up until seven years ago. I arrived in Ireland back in 2002 and it took me five years to figure out what exactly I’d been doing wrong all along in terms of my English improvement.

Anyway, that hasn’t changed my love for the language and now I believe more strongly than ever that ENGLISH IS THE WORLD’S LANGUAGE – at least that’s how I feel about it, and here are 10 reasons why I think so:

1. English is the Business & Finance Language

Let’s face it my friends – nowadays the global economy is more consolidated than ever, large corporations have established themselves all over the world in almost every country and all stock, commodity and currency markets are so closely tied up that even the tiniest changes in an important stock price will have a immediate effect on other prices worldwide.

It is only common sense that in a situation like this a common language would be chosen to make the information flow as easy and effortless as possible, and whether you like it or not – English is the language serving this purpose!

Yes, there are a lot of regional film markets in other languages such as Spanish, Portuguese, French, German, Chinese, Russian – you name it!

Yes, all Hollywood films get dubbed in those languages for local consumption and also we can’t ignore the fact that nowadays your geographical location is irrelevant. Even if you’re a Russian speaker living in Brazil, I’m pretty sure there are ways of acquiring the latest Hollywood blockbusters dubbed in Russian for free online within a matter of milliseconds.

Still, if you consider the following:

… you have to admit that English is the prevalent language in the movie industry.

3. If You Want to Make It to the Big Stage – You’ve Gotta Sing in English!

I hope you’re not going to dispute this one, my friends because you know only too well that I’m in the right!

Sure enough, there’s LOADS of Latino pop and dance music around (and its popularity is definitely on the rise, there’s no doubt about that!) – let alone local music industries catering for specific audiences.

If you want to make it to the international music arena, however, English is an absolute MUST. I guess I wouldn’t be wrong in saying that English started dominating the world’s music since pre-Beatles times, and its relevance has been only increasing over time.

The simple fact of the matter is that any rock/pop/dance music act who wants to hit the charts overseas WILL sing in English!

4. Books & Literature in the Original Language Which is… English, Of Course!

I’m a keen English fiction reader – there’s always a book or a Kindle reader to be found in my workbag and I tend to use every opportunity I can to catch up with my reading.

Throughout my childhood, early teenage years and adolescence I also used to read loads and needless to say it was literature printed in Latvian (I only started reading in English in my early twenties) and I read plenty of renowned classics as well as loads of sci-fi literature.

The amount of literature available in English as opposed to Latvian, however, is MIND-BOGGLING!

I know for a fact that I wouldn’t have enjoyed David Gemmell’s heroic fantasy fiction or any of the GONE series books if I wasn’t reading in English, and while I have to admit that this might not be the case with bigger languages such as Spanish, French and Russian, the fact still remains – most popular fiction is written by English speaking authors.

5. Simplicity of the English Language

I’ve written about this subject previously on my blog – check out this article! – and I have to tell you my friend, it did cause some pretty controversial exchange of opinions and heated debates (check out comments on the above link!).

Too bored to read into those lengthy comments?

One way or another, I personally feel that English IS relatively simple (despite of all the irregularities that are driving others NUTS but I just laugh at it all because contextual learning takes care of it) language and I believe that this factor definitely contributes to its worldwide popularity.

I’m sure some other big languages might also possess these characteristics, but the fact of the matter is that English has the largest vocabulary of all other languages on the planet.

A lot of extinct and existing languages have contributed into the English language – starting with Latin and ending with French, so I guess it would be fair to say that the English language has taken the best from the Germanic (English, German, Dutch) and Romance (French, Italian, Spanish) language groups which allow for very diverse means of expression.

Basically in English, you can say the same thing is twenty different ways depending on what vocabulary you use – there’s slang, there’s conversational English, there’s formal and there’s very formal language – while in other languages you’re more limited to what and how you can say this or that particular thing.

7. English is the Language of Travel!

English speaking countries are the most affluent regions on this planet, and the number of people going abroad on overseas holidays have created the phenomenon of English being the common language people with different national backgrounds use to speak with each other.

Personally I’ve been to Greece, Spain, and Portugal, and my experience backs up my claim by 100% – English is the language used when the local hotel, restaurant or retail staff members communicate with foreigners and visitors.

I can’t vouch for the entire world of course (I’ve never been outside Europe…), but I have a strong feeling that if you went backpacking across South-East Asia or scuba-diving in Egypt, you’ll always find someone who has at least broken English to give you directions and help you find your whereabouts.

Also, judging by what I’ve read, English speaking folks who learn other languages always have difficulties getting natives to speak in their native language with them and most of the time they’ll be spoken to in English, so it kind of goes without saying that English IS the unofficial world’s travel language.

8. English is Also the Unofficial Language of the Internet!

There are billions upon billions of websites on the Internet nowadays, and it’s estimated that more than half of the entire online material is published in English.

Yes, I know, the number of non-English websites is growing at an alarming rate, and I’ve heard some non-sense predictions that in a couple of decades we’ll be all speaking Chinese, but for the time being I’m just merely stating the OBVIOUS – the Internet speaks in English!

9. US and Other English-speaking Power-states

US is still the mightiest country on the planet Earth, and no matter what you think about its impending financial apocalypse, imminent peak oil disasters or Illuminati conspiracy theories, it’s still the most powerful country and a technological, financial and military force to be reckoned with.

English is the official language of the US and the former Commonwealth Countries – UK, Canada, Australia and others – and it’s also widely used across the European Union as the common language.

Those are important states, and it makes English an important language.

Do you think my logic is flawed? Well, you’re entitled to your opinion, but you won’t change mine, either!

We’ve all heard about business opportunities in China and other developing nations, and we all know for a fact that Californian Hispanic population has reached its all-time high figures in recent years.

German is the most commonly spoken language in Europe – if you believe a radio commercial I heard fifty times a day a while back (they were advertising job opportunities in Germany) – and if you speak in Arabic, you can travel pretty much the entire Middle-East and Northern Africa.

Despite all that, foreigners from all over the world are trying to master English, and the number of people trying to learn the language is growing astronomically for the simple reason that English has become somewhat like Math or Geography in any school curriculum.

If you speak fluent English, your job opportunities are much better than those of your peers, and it’s inevitably leading to a certain social status being assigned to fluent English speakers.

ENGLISH and SUCCESS have become synonyms!

Now, tell me what YOU think about this list.

Do you think this entire article is a pile of s&%t?

Would you add another couple of points to this list?

Let me know in the comments section below!